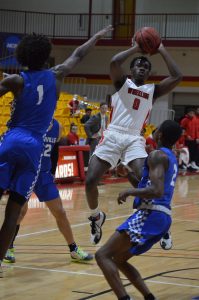 WHEELING — After securing two victories against two of the Mountain East Conference’s top teams (Charleston and West Virginia State), Wheeling seemed to be making a big leap. However, the Cardinals hit a buzzsaw this past Wednesday when Concord shot 67.3 percent from the floor to hand the Cardinals a loss.

Wheeling Coach Will Ryan, had to make defense one of the main focuses over the next couple of days of practice as Glenville State, which averages more than 90 points per game was scheduled to make a trip to the McDonough Center Saturday evening.

The Cardinals definitely showed that they can play defense as they held the Pioneers well below their season average in an 78-67 victory.

“First and foremost, I’m proud of our guys and how they defended (Saturday),” Ryan said. “You hold a team that averages 94-95 (points) per game, to 67, well below their average, says a lot about our team. I thought they showed great resolve, coming off a setback against Concord, where we didn’t defend really well. We tried to hammer that home the last few days in practice. We kind of had to readjust some things, they locked in and they got stops when they needed to. For the most part, it was a great defensive performance. They got multiple guys that can attack you off the bounce and they shoot a plethora of 3s. They lull you here and there.”

Hegel Augustin increased the lead to three on a basket of his own. However, the Cardinals responded with a 13-2 run to put the score at 48-40 with 13:33.

Emmanuel Ansong sparked the run while Jordan Reid gave the Cardinals back the lead for good. Reid had eight points during the spurt.

However, Glenville State did not go away. With 9:57 left in the game, Augustin converted on a conventional three-point play as the score read 54-51 in favor of the Cardinals.

Wheeling, though, did not break and scored 11 of the next 14 points. Jarrett Haines’ basket gave the Cardinals their first double digit lead of the evening, 65-54.

“We went pretty light the last couple of days and refocused our energy on the defensive end,” Ryan said. “We score the ball well enough and do a decent job against pressure. I thought we could get some good looks offensively. It’s just about getting stops.”

Reid and Ansong both tallied 21 points to pace the Cardinals while Haines chipped in a solid 16. Jay Gentry rounded out the double digit scorers with 10 points.

For the Pioneers, Bledsoe secured a double-double with 15 points and 13 rebounds. Augustin had a team-high 18 points and Steven Verplancken had 14.

The Cardinals will have another big test ahead of them on Wednesday when they play host to Fairmont State. The Falcons are currently tied for second place in the conference with Charleston.

“I tell our guys, there’s no rest for the weary,” Ryan said. “You play who’s next on that schedule and you take it one game at a time. I know that may sound cliche and coach speak, that’s the way you have to look. We talk a little bit about standings. I don’t really get into all that stuff, but coming down the home stretch, there’s a logjam for some seeding. You better take game seriously, try to close this thing out and get to the highest seed as possible because come tournament time, anything can happen. You want to be playing your best basketball during this stretch and we were, I thought. Then we hit a snag against Concord, but we got back on track (Saturday). It’s a testament to our guys. They’ve worked extremely hard in practice. They believe in one another and they believe that things can happen. They’re pretty focused every day and that’s all you can ask. Hopefully that continues.”