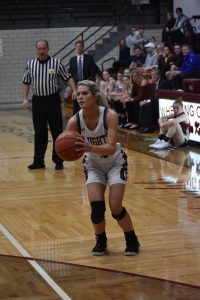 Photo by Kyle Lutz Wheeling Central’s Hannah White is showing everyone what they missed a year ago when she sat out her junior season with an ACL tear.

WHEELING — Determination is a gift. It’s a mindset that pushes a person to go above and beyond all expectations to achieve excellence.

After suffering a torn ACL, missing her entire junior season and going through a grueling rehab process, White has returned to the court and is flourishing once again as a senior.

“I’ve worked so hard,” White said. “I got a lot of my strength back and I’ve got my speed back. I feel pretty much 100 percent, but it took a little bit of time.

“Rehab is probably one of the hardest things I’ve ever done. I couldn’t do anything. I had to teach myself how to walk again. (During) the first month, I just tried to do leg raises because I couldn’t even raise my leg. It was so frail and skinny and I just couldn’t function the way I used to.”

Throughout the whole rehab process, White spent a great deal of time with Wheeling Park’s Asia Roby, who was going through the same thing at the time. Together, they battled the rigorous rehabilitation days, while building a stronger friendship along the way.

“Both of us tearing our ACL’s made us closer I think,” White said. “We really bonded from that. Just being able to text each other ‘Hey, how are you?’ ‘Is this normal?’ ‘Is this happening to you, too?’

“We went to therapy together at Back to Sports in Pittsburgh and it was good having a friend with you going through the process.

“Even having people who have already gone through it like (Wheeling Park’s) D.J. Saunders and Savion Johnson to ask for advice was really helpful.”

Along with Roby, another person who was always by her side was her mother, Heather (Contraguerro) White.

“Mom was always there for me,” Hannah said. “She drove me to Pittsburgh three days a week and she got my ice for me. I basically couldn’t have done any of it without her, my family or my teammates.”

Moments after Hannah’s first game back on opening night of this season, she was greeted by a heart-warming hug from her mom.

“Seeing my mom’s face at the end of that game and going up to her was such a good feeling because she was so proud of me, and I was so proud of myself,” Hannah said. “We just knew that we did it.”

They certainly did. Hannah racked up 16 points in that game, including 11 points in the third quarter as she made her statement loud and clear — she was back.

“I was thinking about that game for almost a year,” Hannah said. “I would mentally prepare myself when I was running on the track trying to get my body in shape or when I was doing weights or trying to get faster. I would just think to myself ‘This is my game back and I’m going to prove to everyone that I’ve worked so hard for this and I’m still the player I used to be.'”

She continued to prove that point during this month’s OVAC 2A tournament when she netted 14 points as the Maroon Knights rallied from 11 points down with 1:11 remaining to pull off a miraculous overtime victory against Shadyside in the semifinal.

Then, she poured in a game-high 23 points in the championship to help her team capture its first conference crown since her sophomore year.

“My goal was to get back to the OVAC game and win,” Hannah said. “Since my freshman year we won back-to-back but my junior year we didn’t get there.

“The game against Shadyside was a crazy game. I had the girls come over to my house and we watched film on them. I wanted to go out there with a bang and end it. Winning that OVAC championship was just such a good feeling because I knew that we did it.”

During her time away from the court dealing with rehab, Hannah still managed to support her teammates from the bench all season long.

“It was great to have her here,” Central coach Penn Kurtz said. “We had a lot of young players on the bench and she’d be talking to them during the game or giving them a word of advice during practice. It was very helpful for them because she sees the game and she can help them see it from a different perspective.”

Now, she no longer needs to tell them her advice. She’s showing them.

“It’s very rewarding seeing Hannah accomplish that,” Kurtz said about the senior overcoming injury. “She had a lot of goals coming in as a freshman and then to get hurt her junior year — the hardest thing about being injured is when you play basketball you have a team, when you are injured you are by yourself.

“For her to be as tough as she has been says a lot about her character and determination.”