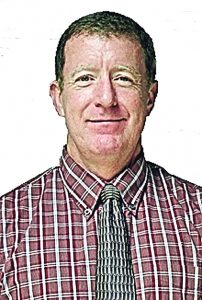 CHESTNUT HILL — Joanna (Bernabei) McNamee has authored a sparkling resume of coaching success. The 2019-2020 season, however, may have been her best yet.

The Weirton Madonna athletic legend recently completed her second year as head women’s hoop coach at Boston College. She inherited a program that was a bottom feeder in the power-packed Atlantic Coast Conference.

BC was picked to finished 13th in the ACC. The Eagles came home in fourth place and advanced to the conference’s tournament semifinals. They were in line to secure an NCAA Tournament berth.

Not surprisingly, McNamee was named the ACC Coach-of-the-Year.

“I still can’t believe it. I am thankful to be surrounded by amazing people, coaches and players,” she said in regards to her coach-of-the-year honors. “It is remarkable what you can accomplish when everyone works for a common goal, no one worries about who gets the credit and everyone buys in.”

A year prior to her arrival, the Eagles went 7-23 overall and 2-14 in the ACC. McNamee made great strides in her first season at BC, elevating the Eagles to a 14-16 mark.

“This season started off in frustrating fashion. We lost some games I thought we should and could have won. But they say everything happens for a reason,” McNamee said. “But I think we grew from those losses and won games later on thanks to the things we learned from those losses.

“I was real happy with how consistent we played as the season progressed. We developed a great attitude. We had confidence, we didn’t dwell on the negative and we moved onto the next play,” she added. “We also didn’t rely on one player. On any given night it could be one of several players stepping up.”

While the season started in sluggish fashion which morphed into steady progress, McNamee believes there was one defining game that helped the Eagles take flight.

“I think everything really began to click after we beat Notre Dame on the road. Our confidence really took off at that point,” McNamee offered. “Our players also really enjoyed each other. We had outstanding chemistry.

“It was an enjoyable and successful season. It was heartbreaking, however, how it ended. We felt we would get an NCAA Tournament bid and still had bigger things to accomplish,” she added. “We lose three seniors. Their legacy is that they helped to establish a new culture here…one of hard work and checking your ego at the door.”

The West Liberty University Hall of Famer guided Albany to 21-12 and 24-8 marks the two seasons before coming to Chestnut Hill.

Prior to her two years at Albany, McNamee enjoyed an impressive stint at the University of Pikeville in Kentucky. She directed Pikeville to a 63-26 record during her three-year tenure at the NAIA school. She guided her charges to a 26-9 record and a Final Four berth in her final season at Pikeville. As a result, the former Blue Don was named the Women’s Basketball Coaches Association NAIA Regional Coach of the Year and the Mid-South Conference Coach of the Year.

The OVAC Hall of Famer enjoyed a brilliant Madonna career. She carried the Lady Blue Dons to three straight state tournament appearances, the highlight being a state title her senior season.

McNamee launched her coaching career at West Virginia Wesleyan. That was followed by stops at Eastern Kentucky, West Virginia and the University of Maryland.

Joanna and her husband Joe McNamee have two sons, Luke and Caden.

∫ Angela Staffileno just concluded her basketball career at Duquesne University. The former Brooke High all-stater was a four-year letterman at the Pittsburgh-based school and averaged five points and three rebounds a game this season for the 20-11 Dukes, coached by West Liberty grad Dan Burt. Staffileno scored 1,885 points and grabbed 1,051 boards in her Brooke tenure. Her dad, Ron, was a three-year letter-winning offensive lineman for the Maryland Terps.

∫ Kristin Lewicki enjoyed a productive season with the Buffalo Beauts of the National Women’s Hockey League. The John Marshall grad was a late-season signee and scored two goals and dished out four assists in her six games. She also added an assist in Buffalo’s playoff loss. The former Adrian (Mich.) College star and D-III player-of-the-year played for the Beauts two seasons ago while skating for Metropolitan last winter. Lewicki is embarking on a career with the FBI.

∫ Kudos to the Cleveland Browns. They were the major players on the free agency front. I really love their signing of offensive tackle Jack Conklin. He is a stud. The Miami Dolphins, however, did the best of any team to upgrade their roster.

∫ In a real world, the Ohio State Boys’ Basketball Tournament would have been staged this weekend. As part of the festivities, Shadyside High head coach Ed Andes would have received the Bob Arnzen Award for at least 20 years of service to his alma mater. Andes has been coaching in the Tigers’ program for 35 years and is the school’s all-time leader in wins. He is also the greatest player in school annals.

∫ Danny Sancomb has done a masterful job of turning the Cal (Pa.) U. men’s basketball program into a major winner in just two seasons. His Vulcans’ program is getting a potent shot-in-the-arm with the the addition of grad transfer Preston Boswell to the team next year. The former Magnolia all-stater played for Sancomb at Wheeling Jesuit.