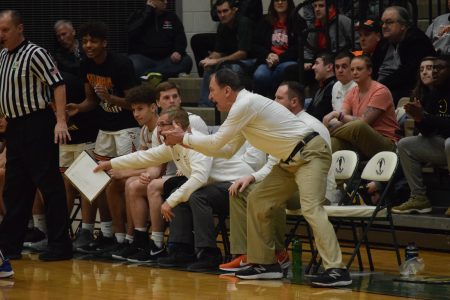 Photo by Seth Staskey Meadowbrook coach Lou “Scooter” Tolzda encourages his team during the OVAC Class 4A championship game against East Liverpool last month at Ohio University Eastern. The Colts advanced to the regional tournament, but the season was suspended and now canceled by the OHSAA due to the coronavirus pandemic.

BYESVILLE — Meadowbrook head basketball coach Lou “Scooter” Tolzda felt his team was playing as well as anyone two weeks ago when it was preparing for the Division II regional tournament.

And who could argue?

The Colts were riding a 15-game winning streak and had won 22 of their last 23 games, including a 61-28 beatdown of Tri-Valley in the district championship game.

But, like so many sports and teams across the country, Meadowbrook met an opponent no one has been able to solve in the coronavirus pandemic (COVID-19), which has paralyzed much of the country and basically all of sports from the youth level through the professional ranks.

Just a couple of hours before boarding the bus to ride to Athens, Meadowbrook officials received a call from the Ohio High School Athletic Association that the boys basketball tournament — and all remaining winter sports — were postponed because of the pandemic, which had already led to the cancelation of conference tournaments in major college basketball, the NCAA Tournament and led to an immediate shutdown of the NBA season.

Since then, however, the Colts — and the other 15 boys basketball teams still clinging to the hopes of a state championship — were waiting anxiously to hear whether or not the seasons would have a chance to resume.

Those hopes were unceremoniously dashed Thursday morning when the OHSAA sent out an email to all schools still involved with the winter sports tournaments (girls basketball, boys basketball and wrestling) that the season had been canceled and no state champions would be crowned for the 2019-20 season.

“I wasn’t surprised,” Tolzda said upon hearing the news from his principal. “I believe (OHSAA Executive Director Jerry) Snodgrass made the right call from the beginning of this because I think the thing that everyone forgets is, as coaches, you always want to try to teach kids more important things in life and this (pandemic) is life 101. It’s much more important than any game.”

Knowing how quickly information can spread in today’s society, Tolzda immediately sent out a group message to his players, informing them of the announcement.

“Whether it’s marriages, jobs, etc. there are a lot of things in life you get re-dos on, but seniors will never get to re-do their senior years,” Tolzda said. “This hurts all of our kids and community, but at the same time, I don’t want anyone to lose site of the bigger picture and none of us have.”

During the time between the district and the scheduled regional contest, Tolzda began to see all of the dominoes fall, starting when Governor Mike DeWine limited the games to having no fans other than four tickets per player.

“The limiting of the fans was a big downer, but we still were going to get to play,” Tolzda said. “Then we got the call, which was a big blow. I just thought we were right on the pace that we were on a couple of years ago (when when we went to the state). Our kids were playing at an unbelievable level and really believing.”

Though the Colts and other teams are left to wonder what might have been, they do finish with an OVAC, ECOL, sectional and district championship. Still, according to Tolzda, there’s somewhat of a hollow feeling.

“I think (the ending) takes away from what we accomplished a little bit,” Tolzda said. “But, it was a successful season.”

While the boys’ tournament was in the regional level, the girls had reached the state level and teams were actually on the St. John Arena court warming up when the OHSAA postponed the events.

The lone OVAC-member school still alive in that event was Fort Frye, which had qualified for the Division IV semifinals and was awaiting to play Minster in the semifinal on March 12 at 8 p.m.