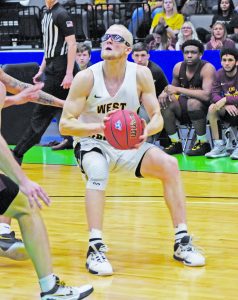 Selected and voted on by NCAA Division II NABC member coaches across the country, the 16-man honor roll is the most exclusive of all post-season All-America teams.

Tuesday’s honor completed an All-America “double” for the 6-foot-4 junior guard from Gnadenhutten, Ohio, who was honored earlier this month as a first-team NCAA Division II Academic All-American.

Bolon is one of just three Academic All-Americans to earn NABC All-America honors and the lone first-team selection.

The Hilltopper sharpshooter is no stranger to post-season awards. In addition to earning Academic All-America honors for the second consecutive season, he repeated as an NABC All-District, D2CAA All-Atlantic Region and All-Mountain East Conference selection and was voted Player of the Year in both the MEC and the Atlantic Region.

With Bolon averaging a double-double from Jan. 1 through the end of the season, the Hilltoppers came roaring down the stretch with 21 wins in their last 22 games. They clinched their 12th national scoring title in the past 15 years (102.4 ppg.) and were chosen to co-host the Atlantic Region Tournament after sweeping their way to an MEC Tournament title.

Bolon played a major role in that success, averaging 18.5 points and 8.7 rebounds a game. He was West Liberty’s leading rebounder in 21 games, led the Hilltoppers in scoring on 11 separate occasions and ranked among the national leaders with 12 double-doubles. In addition, he knocked down a team-high 84 3-point field goals and led the MEC in foul shooting (101-116, .871).

An honors graduate in Biology who is now working toward his master’s degree at West Liberty, Bolon has started every game for the Hilltoppers over the past three seasons and led West Liberty to a sparkling 81-13 (.862) record. He has risen to No. 13 on the school’s career scoring list with 1,757 points and ranks fourth on WLU’s 3-point charts with 282 career 3-point field goals.