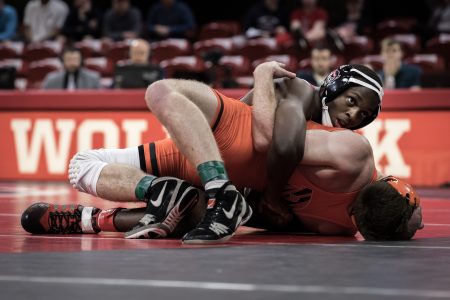 Photo by N.C. State University Tariq Wilson’s season came to an unexpected end due to the coronavirus pandemic.

STEUBENVILLE — Tariq Wilson had March 21, 2020 circled on his calendar since September.

He fully intended to be in Minneapolis wrestling for at least an All-American status — if not a NCAA championship — this weekend.

Unfortunately, the current N.C. State junior and Steubenville High School product is spending the weekend in his apartment, like so many others in this country, following what’s happening around the world with the ongoing battle against the coronavirus pandemic (COVID-19).

Just a few days after falling, 5-4, in the 141-pound ACC Championship match to North Carolina’s Zach Sherman, Wilson was getting a workout inside the Wolfpack practice room when Boo Corrigan, the N.C. State Director of Athletics, entered the room and asked to speak to the team.

It was at this time that what had been rumored was becoming reality.

There would be no chance at a second-career All-American finish for Wilson or an opportunity for the Wolfpack, who finished 15-0 and won their second straight ACC title, to vie for a team championship either.

“It really didn’t hit us (that it was reality) until we sat down as a team and our athletic director told us the news,” Wilson said. “We had worked so hard, since September, throughout the year for this opportunity and we weren’t going to be able to compete or accomplish our goals. It got very emotional in that room.”

After Corrigan finished speak, members of the Wolfpack coaching staff took an opportunity to address the team. And the emotions kept flowing.

“They told us it sucks, it’s horrible, but it’s something none of us could control,” Wilson said. “Many of the coaches teared up when they were speaking because they knew what we all wanted, but we couldn’t have it because of this freak (pandemic) that’s happening.”

While the athlete side of Wilson was disappointed, the human side did allow him to think rationally and made him realize why the NCAA decided what it did.

“I know they’re looking out for the safety of wrestlers, coaches, fans, etc.,” Wilson said. “Our sport is mostly contact and if we had the tournament, who knows who has (coronavirus)? I am not sure there’s a way to truly know, and with us being in contact with one another, we’re at one of the higher risks of contracting it, as far as sports go. That didn’t hit us until later on because at that time of hearing about (the NCAA’s decision), we just wanted to go out and wrestle.”

Even prior to the official cancellation of the tournament, Wilson and the Wolfpack were prepared for an entirely different setting than they’d experienced the last two seasons in Cleveland and Pittsburgh, respectively. It had already been determined that should the event go on, it would be held without fans and only essential personnel.

“The change in atmosphere would have definitely been like having a curve ball thrown at us,” Wilson admitted. “And that, too, was done for the safety of everyone. We weren’t the only sport affected by this. We simply had to keep pushing and moving forward.”

Wilson’s feeling of disappointment was two-fold. Obviously, he was excited for the opportunity to try and become a multiple-time All-American and compete on the sport’s biggest stage. But, he also wanted to get the bad taste out of his mouth from the aforementioned loss in the conference tournament that left him with a 24-6 record for the season.

“I wanted the opportunity to be able to end the season on a high note,” Wilson said. “The last match I wrestled for the season I left the mat with my head down and disappointed. Granted, we won as a team, but I didn’t accomplish my goal and ended really the worst way possible.”

Unlike some of his teammates, Wilson will get another opportunity next season with one year of eligibility remaining.

“The coaches told the guys returning to focus on the positive and make the most of the extra time we have to be ready for next year and come back even hungrier,” Wilson said. “They said to make sure we’re using the extra time to fine tune all of our skills.”

Though the loss in the ACC still stings and will for a while, Wilson is taking the advice of his coaches and turning the page toward the 2020-21 campaign.

“It’s the final chapter, and I am definitely looking forward to it,” Wilson said.