The Register-Herald of Beckley 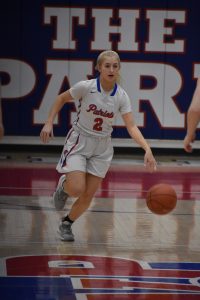 BECKLEY — The Wheeling Park girls’ basketball team held the top spot in the state AP poll for the majority of the season.

After knocking down 82 3-pointers and shooting 90 percent from the free-throw line, Woods captured first team all-state honors for the first time in her illustrious career.

She finished her time in a Patriots uniform with 1,112 points and 212 3-pointers, which is a school record for both boys and girls.

Abernathy turned in 12.8 points and 6.6 rebounds per game, while supplying in a remarkable 37 blocks. She shot 75 percent from the charity stripe.

Garrison was a major contributor in the Patriots’ scoring attack as she poured in 13.1 points a game with 76 treys on the year (44 percent 3-point shooter) and a free throw percentage of 83.

Hunnell paced the Monarchs with 11.4 points per game, while collecting 3.8 rebounds a game. She was deadly from behind the arc as she drained 45 treys in 25 contests.

The sharpshooter embraced that challenge, hoping to build on a sophomore year which saw her lead the Mountain State Athletic Conference in scoring en route to a first-team all-state selection last season.

This season was more of the same for Lacy.

Now she can check off back-to-back first-team all-state selections, as well as a new honor – captain of the Class AAA first team.

“It’s an honor to be captain of this group of girls,” Lacy said. “We played a really tough schedule so I’ve played against most of them and I know how good they all are.”

For Lacy, the seeds of a historic campaign were sown in the offseason when she made a decision about her future.

The sharpshooting senior Wilson led two-time defending champion Parkersburg in scoring with 12.9 ppg, while fellow senior Crites added 11.6 ppg for the Big Reds, who secured the No. 1 seed in the Class AAA state tournament. Both players helped the team back to the Class AAA semifinals before the tournament was suspended.

Cadle, a senior, was the floor general for a Woodrow team that secured the No. 2 seed in the state tournament. Her 14.3 ppg along with eight rebounds and seven assists on average helped the Lady Flying Eagles to back-to-back wins over ranked teams Greenbrier East and George Washington in the sectional championship and Region 3 co-finals, as well as a win over Morgantown in the state quarterfinals – the program’s first state tournament win since 2008.

Boggs’ leadership helped the Hawks to the state semifinal for the second straight year, and she was rewarded with her second straight first-team selection. She nearly averaged a double-double, tallying 19.6 ppg and 9.8 rebounds a contest.

McClure was second in the classification in scoring, averaging a career-high 19.5 points per game while becoming the school’s second all-time leading scorer behind Warren Baker. She led Greenbrier East to back-to-back state tournament appearances, the program’s first such feat since 2014-15. McClure finished her career with three consecutive first-team selections after a second-team selection as a freshman.