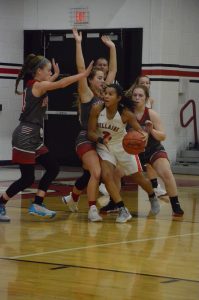 BELLAIRE — When exploring her college options, Katrina Davis wanted to go somewhere that was far enough away from home that she could make some new friends.

Well, after much thought, the Bellaire senior found that destination nearly five hours southeast of the All-American Village in Bluefield State. Nestled among the Appalachian Mountains along the West Virginia/Virginia border, the Big Blues are members of the NCAA Division II and play in the Eastern Athletic Conference.

“It just made the most sense to me. I was a little excited to go somewhere that I know some people but not a lot of people from around here go so I can make new friends,” the Ohio Division III Player of the Year and first-team performer said. “Ashlie Louden from Beallsville is also going there and I got to know her a little bit. It will be nice to have someone that I know, however.”

Davis, who is listed at 5-2, choose Bluefield State over Wheeling University, Marietta and a pair of schools from the Philadelphia area in Misericordia University and Brynn Athyn. Her size might have been a factor in the lack of recruiters ringing her cell phone off the hook, but her numbers merited more response.

In four years on Guernsey Street, she scored 1,564 points which is good enough for third on the all-time female school scoring charts. She blistered the nets for 629 of those markers this past season when she averaged 28.3 points a night.

A true stat-sheet stuffer, Davis posted eye-popping numbers in several categories. Although undersized, she pulled down 727 rebounds, charted 433 steals and handed out 301 assists, with 122 of those coming as a junior when teammates Maci Crozier and Natalie Stoner both surpassed the coveted 1,000-point barrier for their careers.

“The steals mean more to me because I came in my freshman year as one of our ‘post’ players because we were so small,” she added. “I was expected to box out and get rebounds. I take pride in my steals because I would have never thought I would get that many.”

Of her 175 thefts this season, 18 came in a game against East Liverpool when she etched her name in the state record book.

While many observers think her talents came from her cousins – Jose and Nate – she credits her father, Alvin, for her success.

“He really deserves all the credit. He has taught me everything I know about the game, basically, since fourth grade,” she admitted. “He’s never forced me to play. He let me come to the game instead of the game coming to me, so it was really fun when I chose to play and not that I was being forced the play.”

She knows when he’s in the stands.

“I don’t play too well when he isn’t there, but when he shows up he usually yells at me and asks if I’m ready to start playing. That really gets me going.”

Being named the player of the year hasn’t really sunk in yet.

“I was really shocked. I had no clue I was even in the running,” she continued. “It was quite an accomplishment for me because it wasn’t on my list of things I wanted to achieve this year.”

“Despite all of the numbers she has put in the record book, she has shown the younger players the work and dedication it takes to be one of the best. She was at every workout and summer league game, but she has shown that it takes more than just attendance to be an elite player,” he said. “She competes in every game, possession and drill. That competitiveness, instinct and work ethic is the perfect storm to create a prime-time player. She will be an example that I will cite to younger players throughout the duration of my coaching career.

“As a player she should literally get an assistant coach salary. She is obviously a great player and one of the reasons is because she knows and understands the game so well,” he praised. “I often discussed with her about our defensive strategies and matchups. I often asked her for her insight on many things such as pre-game strategy and game-time adjustments. She is a one-of-a-kind player when it comes to her knowledge of the game. I will definitely miss having a player/coach on the court.

“As a person, she is someone I could always depend on, which is a huge compliment. When I think about my own children, I hope that they always find me dependable. As a coach she has inspired me to work as hard as I possibly can to give her and her teammates the best opportunity to succeed.”

The Big Blues, former members of the now-defunct West Virginia Intercollegiate Athletic Conference, were 16-11 and advanced to the United States Collegiate Athletic Association Final Four before the campaign was curtailed due to the coronavirus pandemic. They were seeded No. 2 and defeated seventh-seeded Me-Fort Kent 59-53 in the quarterfinals.