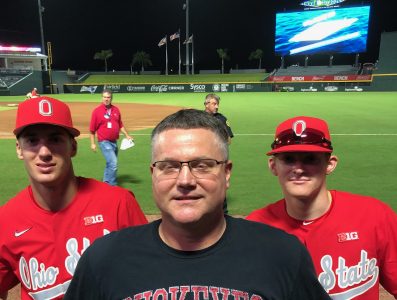 TORONTO — Nolan Clegg and Nate Karaffa, two starting outfielders for the Ohio State baseball team, remember like it was yesterday when the coronavirus pandemic hit the sports world.

The Buckeyes, fresh off a split against North Florida from March 10-11 in Jacksonville, Fla., were on a flight back home to Columbus when news first broke of Rudy Gobert, a star player on the Utah Jazz, being diagnosed with the virus. When the Buckeyes landed, the NBA put a temporary end to its season.

Nobody, at least Clegg, initially thought about college baseball being postponed or canceled until the bad news broke shortly after.

“Everything was canceled. We were like, ‘Oh my God.’ Then, the next day, we had a meeting,” Karaffa said. “Coach (Greg) Beals texted us, and then we had a meeting. At this point, the meeting was about how we were going to play with no fans. About two or three hours, he texted again saying everybody has to come back. By that time, it was all over social media.”

Just like that, the season was over. Karaffa, living in a freshman dormitory, and Clegg, a sophomore, received a certain date and time to clear out their place and travel back home.

Before everything went into a standstill, the former Toronto baseball standouts were back together.

“It’s nice. It’s just like being back in high school,” Clegg said. “I think it made his transition to Ohio State a little easier, having a familiar person to introduce him to everybody. Baseball is a brotherhood, and I just tried to help him through the awkward meeting phase.”

“It’s been fun because he got to play in a lot of games with me,” Karaffa said. “I got to play right next to him. He’s been a big help, and not just him but all of the upperclassmen and coaches.”

The two literally played next to one another. Clegg is Ohio State’s starting right fielder. Karaffa, although recruited as a shortstop, started in center field.

“We had some openings in the outfield this year,” Clegg said. “We had pretty much everyone back from last year in the infield and the starting rotation. He was just getting as many quality at-bats in the lineup as he could.”

Most of the team that returned won the Big Ten championship in 2019. Yet, Karaffa’s talents could not be overlooked, so he had to be put somewhere.

Karaffa is the first to say there was an adjustment early on. His stats reflect that, but they don’t tell the whole story.

“I was actually hitting the ball well not all year, but a decent amount,” he said. “I was hitting it well but couldn’t get hits. It’s night and day playing at the collegiate level compared to high school.”

“He’s been putting a lot of balls in play and been hitting to both sides of the field,” Clegg said. “His average and stats don’t tell the whole story. I mean you could have a hard-hit ball right at someone, but he’s been doing really well.”

Clegg, on the other hand, appeared in 10 games and started nine of them.

He hit .333 with three doubles, a home run, five runs scored and three RBI. He, like Karaffa, tied for second on the squad with three multi-hit games.

As a true freshman, Clegg played in 19 games and started 12 (eight in center field and four as a designated hitter). He batted .286 with a pair of doubles, two homers and 13 RBI.

“We were definitely getting there at the competitive level. Our pitching staff was coming around,” Clegg said on the Buckeyes’ progression this season. “It was looking pretty great before it was canceled. I felt like I was doing pretty well.”

While the world waits for the pandemic to blow over, Clegg and Karaffa do their best to stay in baseball shape.

Clegg and his brother, A.J., get out to a relative’s yard just big enough to hold practices. A.J. Clegg was heading into his senior season with the Red Knights as their ace pitcher. It could still happen, according to the OHSAA’s tentative plan.

“He seems to be doing pretty well,” Nolan Clegg said. “He hasn’t been getting too frustrated. He understands that something like this, even during his senior season, is out of his control. If they don’t go back to school, then he’s just looking toward the future at Northern Kentucky.”

As for Karaffa, he mainly works out at his home and is hitting whiffle balls off a tee.

“It’s been different for sure,” he said. “I’m just trying to stay in shape the best that I can by lifting and working out in my house.”

Along with staying in shape, all Nolan Clegg and Karaffa can do now is finish their online courses and hope for the best, while taking a step back to try and enjoy what they had in 2020.