Goalie stepped up and excelled at new position 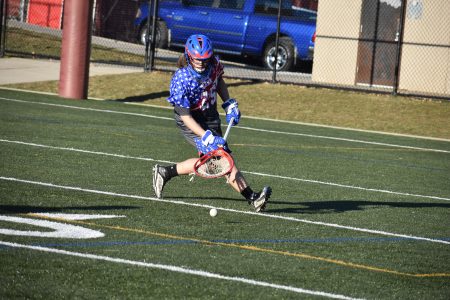 Photo by Cody Tomer Wheeling Park senior goalie Christian Nestor has verbally committed and plans to sign his National Letter of Intent to continue his academic and athletic careers at Wheeling University next season.

WHEELING — A season ago, Wheeling Park’s Christian Nestor took one for the team and played a position he had never played before — goalie.

Fast forward a year. That decision has paid off as he made a verbal commitment to continue his academic and lacrosse careers at Wheeling University.

However, in the midst of the current COVID-19 pandemic, Nestor was unable to sign his National Letter of Intent publicly, but where there’s a will, there’s a way.

“I verbally committed over the phone,” Nestor said. “I am going to be signing my National Letter of Intent and mailing it back to my coach.

“I was actually very fortunate that I had already narrowed my school choices down and had already toured Wheeling University. Everything else I needed, I was able to do over the phone or online, so I was able to move forward with my decision.”

Nestor knew when he first met Wheeling University coach Nick Anagnostis that not only was this the right team for him, but it was the right school.

“Growing up in Wheeling, I have always liked Wheeling University,” Nestor said. “I have a learning disability and I was very impressed by the new learning center at the university. I was looking for a smaller university with opportunities for tutoring. I also had a great meeting with Coach Nick Anagnostis. His goals for us as both students and athletes are everything I am looking for in college. I am really looking forward to playing for him next year.”

At Wheeling Park, Nestor left his mark on and off the field.

As a junior, Nestor was selected for the W.Va. Lacrosse All-Star Team and was the player’s choice for the Team MVP Award, before being named a team captain as a senior.

His time at Wheeling Park has paved the way for future success.

“Our lacrosse program at Wheeling Park has been great,” Nestor said. “I have been very lucky to have amazing coaches and teammates who have encouraged me. We have grown as a team.

“Last year we needed a goalie and Coach Jeremy Merkle talked to me about trying it. I couldn’t believe how much I enjoyed it and my team was very supportive. It was a great season and I learned so much from Coach Merkle, Coach Subasic and all the coaches.”

Now, heading into his senior season, Nestor has continued to learn and sharpen his skills with the help of new head coach Thomas Salkovick.

Unfortunately, the postponement of the season has made for a bittersweet moment for Nestor and his teammates.

“Coach Salkovick and his coaching staff have dedicated so much of their time to our team and have been really supportive.” Nestor said. “We worked so hard getting ready for the season and were feeling so good about the start of the season.

“The weekend everything was postponed, it was supposed to be the Fairmont Meltdown and we were so excited to see how we would do against all the different teams. It was heartbreaking when it didn’t happen. We were going to make a great run at state this year. I’ve had the best coaches including my coaches at Park and Natural Lacrosse Club. I will never forget how they helped me develop as a player and person. I thank them for believing in me and my parents have always been super supportive, too.”

Despite only getting to know Nestor through practice and watching him play from the John Marshall sidelines in years past, Salkovick has a great deal of admiration and respect for the future Cardinal.

“I have only known Christian for a very short time being this was my first year with Wheeling Park Lacrosse,” Salkovick said. “I have coached against him in recent years and even then, on the opposing side, you could tell he was a quality player and a great young man.

“Once I came on board as Park’s head coach you could really see Christian’s work ethic, leadership qualities and his overall good nature. We, the coaches, noticed it so much so that we chose Christian as one of our team captains this year. I really wish I had more time to get to know and work with Christian.

“I do plan to attend as many Wheeling University Lacrosse games as possible, not only to watch Christian but to support the university and their program, as well.”

Nestor didn’t begin playing lacrosse until his sophomore year of high school but even with such little time being involved in the sport, the last few weeks without it have been hard to handle.

“My friend and awesome lax player, Tyler Britton, told me to come out to try it and I thought it was great,” Nestor said of how he got his start playing lacrosse. “Being a goalie has been amazing and there is nothing better than making a key save, especially in a big game.

“I miss everything about playing lacrosse. We are all practicing and working hard at home but it’s not the same without being together as a team. I miss the team and my coaches.

“I can’t thank my team, my coaches, the school and the team parents enough for all their support.”

Along with thanking his teammates, coaches and family, Nestor had one more “Thank you” during the current coronavirus outbreak.

“I’d like to say thank you to everyone out there who is risking their health and safety right now to keep us safe through this pandemic,” Nestor said. “I appreciate all they do and I’m keeping them in my prayers.

“I also want to tell my teammates and my senior classmates how sorry I am that our year is getting cut short.

“I’m so sorry that there are going to be so many blank pages in our yearbook where memories should be.”

One thing is certain. There are plenty of memories waiting to be made at Wheeling University for Christian Nestor.