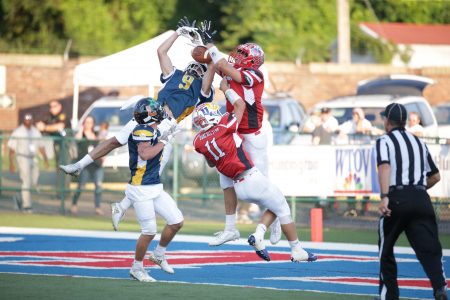 File Photo Because of the ongoing coronavirus pandemic, the Rudy Mumley OVAC All-Star Football Game has been canceled. It was slated for July 25 at Wheeling Island Stadium.

Because of the ongoing coronavirus pandemic, another staple of the Ohio Valley has summer has been canceled.

During Wednesday’s OVAC Executive Board Meeting, which was held via Zoom, the conference formally called off the Rudy Mumley OVAC All-Star Football Game, which was slated for July 25 at Wheeling Island Stadium.

“We went down to the wire (during the meeting) trying to pull everything possible out of a hat to find a way (to hold the game), but in the end the common denominators — with every suggestion — we kept coming back to were safety and health,” OVAC Executive Director Dirk DeCoy said. “It was determined that it wasn’t going to be worth the risk of exposing people and these kids to the possibility of getting sick.”

This marks only the second time since the OVAC took over the all-star game in 1972 that the game wasn’t played. Weather caused the 1992 game to be canceled.

However, this is the first time that the entire event has been canceled. Even in ’92, the events surrounding the game, including the camp, were held. The Queen of Queens winner was crowned under the grandstand to avoid the weather.

“This definitely hurts,” DeCoy said of the decision. “It hurts more because we’re giving it our all to give (a sense of) normalcy, and to realize it’s not worth the risk is tough.”

“My message to the student-athletes, the parents and fans is we’re down, but we’re not out,” DeCoy said. “We’re going to wrap up some things for spring and now that we have the all-star decision (made), we’ll stand by it and start moving on to fall sports.”

Shortly after the meeting, game director Dirk Fitch began the process of reaching to each person involved with the game via email.

DeCoy estimated the game involves nearly 300 kids in terms of the players, cheerleaders, band members and Queen of Queens candidates.

“When you consider the kids, coaches, chapperones, 400 people at the Evening With the Stars, 800 at the queen pageant, 300 at the pep rally and then another 2,600 in the stands, can we say it’s worth the risk?” DeCoy said.

Fitch has been involved with the game in nearly way possible from player, assistant coach, father of a player and now game director, so he’s well aware of the meaning the game has for the Ohio Valley.

“We realize how big of a part of the Ohio Valley this game is,” Fitch said. “It’s a shame, but the safety of everyone takes top priority.”

Fitch, who is in his second year as game director, has had a challenging early spring simply because all of the schools — on both sides of the river — have been closed.

“I feel really bad for this senior class,” Fitch said. “They’ve missed out on so many things already and this is another.

“Obviously, these kids will go on to have bigger events in their lives at some point, but we realize that many of these kids have grown up watching and attending this game and they dream about the opportunity.”

Fitch confirmed that plans for the 2021 game are already under way.

“The game will definitely continue and we want it to come back as strong as ever,” Fitch said. “Hopefully, next summer, we’re able to pick up where we left off, move forward and put on a great experience for everyone involved.”

Along with the OVAC All-Star Game, the Upper Ohio Valley Italian Festival, which is held concurrently on the waterfront in downtown Wheeling, was canceled earlier this month.

The Ogden Newspapers Half Marathon and Wellness Weekend, which is usually held on Memorial Day weekend, was canceled and the Debbie Green Memorial 5K road race has been canceled as well.

No decision has been announced about the status of the Beast of the East Baseball Tournament, which is held annually all over the Ohio Valley over Fourth of July weekend.