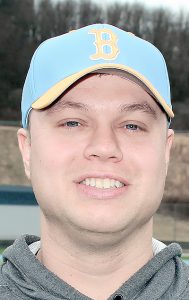 WEIRTON — One of the main reasons T.J. Miller resigned as Oak Glen’s baseball coach after last season was for his family.

Leaving his alma mater and joining Weir as an assistant coach for football and baseball helped him recover some lost time and get his personal life back on track.

Everything was going according plan, until former baseball head coach Jason Angle resigned days before the Red Riders’ scheduled opening day in mid March. Miller, knowing exactly what he wanted to do to help his new team any way he could, threw his name in the hat.

“I missed it. I was able to get some family stuff in order and some personal time. I focused on things that I needed to,” he said. “I was getting that itch back.

“I really enjoyed my time as head coach at Oak Glen. I figured I would miss it. When the opportunity presented itself, I wanted to throw my hat in the ring and thought I could make a positive impact. And, I didn’t want to pass up the opportunity and regret it down the road.”

Weir thought the same thing and announced the hiring of Miller as the next head coach, with the board approving on Tuesday. All of the interviews were done online.

Miller was not present when news first broke about Angle leaving. When he first heard about it, the first thing that came to mind was what was he and assistant coach Tanner Werkmann going to do that would be best for the players?

“It was just a mixture of things happening,” Miller said.

“We were scrambling for a little bit. I think the original assessment was coach Werkmann and I would take care of things for varsity and jayvee. Very, very shortly after, schools was closed and things were postponed. It was just a crazy mix of one thing after another. We were doing everything we could that was best for all of the kids.”

Miller served 10 seasons as a coach for the Golden Bears, with the last three being the head boss. Oak Glen went 43-32 from 2017-19 and had numerous encounters with the Red Riders, including some in the Class AA sectional tournament.

The familiarity of the rivalry may have had an impact in the hiring process.

“Realistically, I think my head coaching experience helped,” Miller said. “I really don’t know into all of the factors they were looking for. But, I do think it helped with my experience (at Oak Glen). I did have success in those three years, as well as everything I brought to the table along the way.

“I knew a good bit of Weir High baseball from scouting and playing them. I had a familiarity with many of the boys. Also, coaching football this past year helped me get more familiar with most of them. The biggest thing that helped me at Oak Glen was maturing and learning from mistakes.”

The Golden Bears eliminated Weir in the tournament a season ago, 13-3 in five innings, on May 7. It also marked Miller’s final win with Oak Glen.

Judging by that Weir High squad and what he had in front of him for 2020, he saw a lot of promise.

“We returned a lot of veterans. We were a senior-driven team,” Miller said. “The boys were working very hard in practice when we were able to practice. I think all of our expectations were having a good season. It’s very unfortunate for the team for everything that’s happened.

“I still have a lot great relationships with those at Oak Glen. I still stay in touch with many of them. Taking this job, I’m obviously all in with Weir. I don’t know how it is going to affect the rivalry. It’ll be interesting to see.”

While at West Liberty, Miller played football in 2007 but did not return to the gridiron due to an injury.

“Right now, I just want to do whatever will be best for the kids because they’re obviously going through a rough time,” Miller said. “Whatever is best for them is what we will go with.”