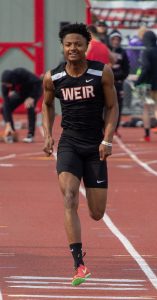 Photo by Kyle Lutz Weir track star is taking his talents to the University of North Carolina to continue his academic and athletic careers.

WEIRTON — During the 2019 West Virginia state track meet, Weir’s Sebastian Spencer took the baton in the Class AA 4×100 in seventh place. From there came the most improbable comeback the crowd would see. Spencer made up ground and the closer he got to the lead of the pack, it became clear that he had the mindset that he could win the event.

In the end, Spencer, a junior at the time, crossed the finish line first and secured a victory for he and his relay teammates. Spencer also captured gold medals in the 100, 200 and 4×200.

FloTrack posted the whole 4×100 race to Youtube and with over 600,000 views, the rest was history, and that’s when the offers came rolling in for the Red Riders standout.

“It was different,” Spencer said. “It’s a feeling I never really felt before. For people to see that video and see what I’m capable of and be able to offer me just off that video sometimes and I had coaches tell me they got goosebumps watching that video. Having that video getting me out there a little bit, all those coaches stating to recognize me more and more. It’s a different feeling, just knowing that you’re wanted at different schools, it’s definitely a good feeling.”

Some Power Five schools that reached out were Ohio State, Tennessee and North Carolina. In the end after visiting the campus, Spencer verbally committed to become a Tar Heel.

“It definitely feels good,” Spencer said. “There was a lot of things that were going through my head. Now to be able to finally commit and to be done with the recruiting process, it feels really good.”

Spencer’s visit to UNC was event-filled and something he will remember. With all the factors that came into play, he felt like being part of the Tar Heel family was going to be the right fit for him.

“I think the campus is really nice and beautiful. I love the weather down there. I got to check out a basketball game and just hanging out with the guys. I got to see the indoor practice facility that they’re doing work on, it looks really good. The team all-in-all definitely stood out to me.”

Although the video that surfaced was on the track, the offers he received also came for football. After all, Spencer was also a standout football player at Weir.

During his senior season at quarterback, he passed for 848 yards and nine touchdowns. He also ran for 894 yards ad 14 scores.

“Football was actually my first option,” Spencer said. “I always wanted to go to college and be a football player, but just the way this year’s been going out, I figured my success in track and being able to go nationals, I’d have a lot of more success in track and field.”

And Spencer was well on his way to have another successful season in track as he was looking to defend his state titles. During the indoor season, he qualified to the New Balance Nationals indoor meet in New York. Unfortunately, Spencer received the news the meet was canceled.

“I woke up the morning we were supposed to leave and before school my parents told me it was canceled,” Spencer said. “It was definitely heartbreaking and I went to school a little upset. All the hard work I put in, I felt bad.”

While at home, Spencer is making sure he keeps his endurance up by running, working out and doing push-ups to stay in shape in the case they are called back to compete in track.

And when he does make the trek to Chapel Hill, Spencer wants to be the best teammate he can to his new Tar Heel family.