Beast of the East Canceled Due to COVID-19 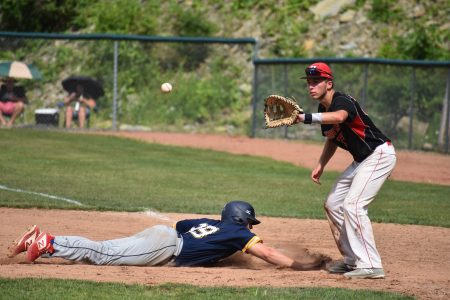 Photo by Cody Tomer Wheeling Post 1’s Bryce Bauer dives back into first base during last year’s Beast of the East Tournament. This year’s event has been canceled due to the COVID-19 pandemic. The tournament was slated for July 2-5.

WHEELING — A day after the cancellation of the Ohio Valley’s biggest football event of the summer (Rudy Mumley OVAC All-Star Game), baseball followed suit on Friday as organizers of the Beast of the East Tournament canceled the four-day tournament that was slated to run July 2-5 due to the COVID-19 pandemic.

The player showcase that normally kicks off the fun-filled weekend has also been canceled.

This is the first time in the Beast of the East’s 32-year existence that there will not be a tournament.

“The biggest thing was interstate travel,” Beast of the East organizer Bo McConnaughy said. “Will they be able to travel from state-to-state? We had teams from Canada already drop out because of the borders being closed.

“Also, our insurance doesn’t cover viruses. If someone came in here and gave it to somebody else, we would be liable.”

“Another factor was hotels. We received calls from hotels saying they were going to change how they accommodate teams for the tournament. They didn’t give us any details but usually there are four kids in a room and we can’t have that.”

Last year, 102 teams participated in the Beast of the East but due to the coronavirus, only 70 teams had signed up for this year’s event.

“We only had 70 teams and in order for this tournament to go on we need more than that,” McConnaughy said. “We would have had only four or five teams in each division and we would have to eliminate a lot of fields.

“Thirty-forty teams have already paid, so refunds will go out Monday. Usually we are almost full by now and we didn’t think we were going to get many more teams to come anyway with what’s going on right now.

“We were concerned about the players and the fans. Every player on a team is going to touch the ball at some point in the game and they’ll be standing shoulder-to-shoulder in the dugout and we looked into field directors, workers and umpires, as well.

“We normally put the umpires up at West Liberty but its campus is closed now.”

The Beast of the East has plenty of effects on the area financially, too, from local restaurants to hotels and stores.

“Our other concern is how this will affect the local economy,” McConnaughy said. “We wanted to wait as long as we possibly could before canceling because it is impacting everybody.”

Despite this year’s cancellation under unfortunate circumstances, McConnaughy has one message for baseball fans and players in the Ohio Valley.

“We’ll be back next year,” he said. “We appreciate the support the valley has given us over the years and everybody who is a big part of this. It’s just the way things are right now and we would rather air on the side of caution.”