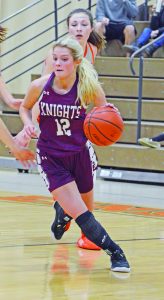 WHEELING — Four years at Wheeling Central have flown by for senior guard Hannah White, but she has cherished every victory and heartbreaking defeat, while overcoming insurmountable obstacles along the way.

Each of those moments helped pave the way as White signed to continue her academic and basketball careers at Cleveland State University.

“After visiting the campus a few times, I had a great feeling about Cleveland,” White said. “I feel it is a great fit for me as a student athlete. I love the coaching staff and the way Coach K (Chris Kielsmeier) has turned the team around. They had a pretty successful season last year and I’m so excited that I can be a part of something so great. It really is a family and I’m thankful for the opportunity to be a part of something so special.”

White becomes the third player from the Wheeling Central girls’ team to sign to play Division I basketball, with Kaylee Reinbeau heading to Bucknell and Eden Gainer going to Columbia.

The trio impressed on the court and were best friends off of it.

“It is so cool that I can share this with players like Kaylee and Eden,” White said. “Not only are they great athletes, but they are also my best friends. I’m going to miss playing with them but we have made great memories and I can’t wait to see their success.

“We have all worked so hard and I’m so glad we were able to achieve each of our goals.”

As a senior, White was named second team all-state, turning in 18.2 points, 6.8 rebounds and 5.4 steals per game and helping lead the Knights to an OVAC title and an appearance in the state tournament after overcoming a torn ACL during her junior year.

She also helped Central through some tough times this year as Gainer and Reinbeau both missed time with injuries of their own.

“This season was so special to me, not only because it was my senior year, but because of how hard I worked to play again after my ACL injury,” White said. “Not being able to be on the court my junior year gave me a new appreciation for the sport I love. I knew I had to not only be physically ready, but mentally ready, as well.

“Knowing that all of my hard work has paid off is an awesome feeling.”

White’s passion for the game was clear throughout her career and her pride for Wheeling Central could be seen with shot, rebound and dribble of the basketball.

“I have made so many wonderful memories at Central,” White said. “My time there in the classroom and on the court has shaped me into the person I am today.

“I’ve learned the importance of leadership, hard work and many lessons I’ll take with me to the next level.

“I would like to say thank you to my teachers, coaches and teammates. I would especially like to thank my parents and my family for everything they have done for me.”

Wheeling Central girls’ coach Penn Kurtz saw first-hand what White was capable of on and off the floor and has no doubt she will bring that same tenacity and drive to her collegiate career.

“Hannah was always welcoming the younger players,” Kurtz said. “She was interested in them and helping them to be better players.

“She will work hard and focus on areas of improvement defined by her coaches. She will do whatever it takes to succeed.”

There is no denying that White will provide great leadership and skills for the Vikings in the years to come but she has even bigger plans down the road.

“I plan on majoring in Biology as a gateway to medical school,” White said. “With Cleveland being in the heart of the city and being surrounded by hospitals such as Cleveland Clinic, it gives me a tremendous opportunity.”