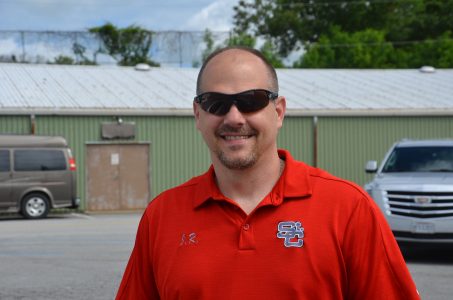 ST. CLAIRSVILLE — One of the premier boys’ soccer programs in eastern Ohio finally has a head coach.

Jeff Roberts, who was an assistant last fall, was named to that position recently at St. Clairsville High School. He served as the interim head coach for two games, which just happened to be the Ohio Valley Athletic Conference Class 4A semifinals and championship game. The Red Devils won both contests.

“Let’s hope we can continue that,” Roberts, a native of western Pennsylvania, said. “The kids played really well that week.”

Admittedly, Roberts didn’t know a whole lot about the sport until he arrived in Belmont County.

“I really didn’t know a lot about the sport until I got married 12 years ago,” he allowed. “My wife’s kids played and I kind of got thrown into coaching the little guys. Once I find an interest, however, I kind of dive into it and try to perfect it. I’ve done a lot of studying of the game.”

Since 2008 he has been coaching with the St. Clairsville Recreation Department with the 6U to 14U age groups.

“I like to take the kids to tournaments,” he said. “That’s where you learn.”

He also assisted Wes Stoner with the St. Clairsville girls’ program in 2016.

“I had a big group (seniors) graduate last year that I had coached since they were 10 years old, but I still have probably 10-15 kids that I have coached in one way or another still on the team, so the transition of head coaches has been a smooth one thus far.

“I think this is going to be a really good season for us. I’m excited for it,” he stressed. “We have a lot of sophomores and juniors that are looking good so far. We also have some good freshmen coming up, so the future looks promising.”

Roberts said his players have been going through conditioning drills.

“We’re in Phase 2 of the COVID-19 pandemic. We’re monitoring several things at our conditioning sessions. We’re keeping our social distancing. We’re allowed up to 50 people for outdoor activities for this week and next. Phase 3 starts the following week.”

He said he and his staff check every players temperature when they arrive for conditioning. They also ask them a series of five questions just to make sure everyone is okay.

Roberts grew up outside of Pittsburgh and joined the military right out of high school. After about 14 years in he came to the Ohio Valley on a recruiting mission, and for about six more years he served as an Air Force recruiter in St. Clairsville before retiring.

His staff includes Kevin O’Grady and Logan Young. Taylor Wissman will also assist at times. O’Grady helped out last year while Young, a former St. C. standout, came over after helping with the girls the last couple of seasons.