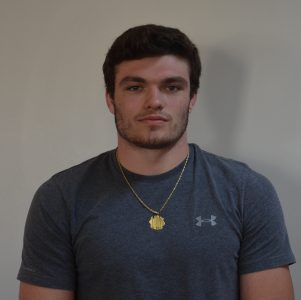 MARTINS FERRY — The nationally ranked recruiting class for the 2020-21 West Liberty University wrestling team has added another gem to its collection.

Martins Ferry’s Richard McFarland has indicated he will continue both his academic and mat careers on the Route 88 hilltop.. McFarland compiled 105 career wins for the Purple Riders. He was a three-time state qualifier, only failing to advance during his freshman season. He finished fourth at the OVAC Ron Mauck Tournament.

“It’s close to home, I like the coaches and I like the atmosphere,” he said. He said they have him penciled in at 184 pounds.

McFarland was the Ohio Division III Heath District 182-pound champion this past winter.

“That was the best weekend of my life,” he said of the two days in central Ohio. I wrestled well that weekend.”

However, he wouldn’t get a chance at reaching the placement podium for the first time due to the global COVID-19 pandemic.

“It was pretty hard to take when I heard that the state tournament was being canceled,” he admitted. “I was ready to go out there and show people what I could do.”

Also a multi letterman in football, he said he received a few small school offers, but his love for wrestling was the deciding factor.

He said he will remember a lot about his days as a Purple Rider.

“My coaches always pushed me. They were the best coaches in the (Ohio) valley to me, maybe even the state,” he said.

He wanted to single out several individuals who helped make his college dream a reality.

“Coach (Chad) Ware, Coach (Taylor) Yoder, Coach (Chas) Yoder and Hunter Bodkin for all the time and effort they put in to make me better. I would also like to thank my family for all of their sacrifices over the four years.”

He plans on majoring in physical education with the hopes of becoming a gym teacher and returning to his alma mater as a coach some day.

“Richie has gotten better each and every year. He gained confidence in himself in each match that he wrestled,” second-year Martins Ferry head coach Chad Ware said. “Richie had a tremendous district tournament putting himself in a great position for the state tournament. We, as coaches, believed that Richie not only had the ability to place at the state tournament, but finish very high on the podium.”

McFarland is the son of John and Tiffany McFarland of Martins Ferry. His younger brother, Johnny, also wrestles.