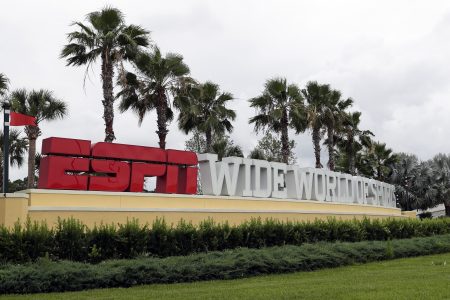 A sign marking the entrance to ESPN's Wide World of Sports at Walt Disney World is seen Wednesday, June 3, 2020, in Kissimmee, Fla. The NBA has told the National Basketball Players Association that it will present a 22-team plan for restarting the season at Disney. (AP Photo/John Raoux)

The NBA took a major step toward getting back on the court Thursday, with the league’s Board of Governors approving a 22-team format for restarting the league season next month at the Disney campus near Orlando, Florida.

The vote was 29-1, with Portland casting the dissenting vote, said a person with knowledge of the situation. The person spoke to The Associated Press on condition of anonymity because the league did not publicly release voting details. The National Basketball Players Association has scheduled a meeting for Friday to vote on the plan.

Teams would arrive at Disney around July 7 and play an eight-game slate of games starting July 31 at the ESPN Wide World Of Sports complex. All teams will stay, practice and play at Disney and the NBA Finals — which would have started Thursday if not for the coronavirus pandemic that caused the NBA to suspend its season on March 11 — will likely stretch into October.

“The Board’s approval of the restart format is a necessary step toward resuming the NBA season,” NBA Commissioner Adam Silver said. “While the COVID-19 pandemic presents formidable challenges, we are hopeful of finishing the season in a safe and responsible manner based on strict protocols now being finalized with public health officials and medical experts.”

The eight-game slate — it’s unclear if they will be classified as regular season games — will help determine playoff seeding.

“While there is still work to be done, we applaud all the effort and collaboration that has gone into finding a safe, competitive format,” Orlando Magic CEO Alex Martins said. “It has always been our feeling that sports have the ability to bring people together and we look forward to restarting the NBA season while using that platform to drive meaningful social impact at this period of time.”

There are numerous other details to continue working through, including finalizing specifics of what the testing plan at Disney will entail and calculating the financial ramifications of playing fewer games.

Another person, also speaking to AP on condition of anonymity because the details of the ongoing talks have not been publicly released, said the NBPA and the NBA are working on “lengthy” medical protocols. The details will be shared with teams once those discussions are completed, which will be long before they arrive at Disney, the person said.

“The NBA is taking all the appropriate measures, and working tirelessly to provide a safe environment for our team and staff,” the Dallas Mavericks said in statement.

While working to finish this season, the league also has made decisions on next season — with the draft lottery rescheduled for Aug. 25, the draft on Oct. 15 and opening night for the 2020-21 campaign is tentatively set for Dec. 1. The G League also announced Thursday that it canceled the remainder of this season.

The 22 Disney-bound clubs would play somewhere between 71 and 75 games before the playoffs begin, down from the customary 82-game slate. The teams who didn’t qualify for the restart will see their seasons end after having played somewhere between 64 and 67 games.

Roughly 15% of what would have been the full NBA regular season won’t be played, which means players stand to lose around $600 million in salary. How that process will work is among the issues that the league and union are still working to solve.

But one of the biggest hurdles is now cleared, in an NBA season like none other. The league is planning for the same playoff rules as usual, that being every round utilizing a best-of-seven format.

The 22-team plan includes all teams that were holding playoff spots when the season was stopped, plus all other clubs within six games of a berth.

Milwaukee, the Los Angeles Lakers, Boston and reigning NBA champion Toronto had already clinched playoff berths. Now with only eight games remaining for each team, it means that eight other clubs — Miami, Indiana, Philadelphia, the Los Angeles Clippers, Denver, Utah, Oklahoma City and Houston — have postseason spots secured, and Dallas virtually has one as well.

That leaves nine teams vying for three remaining playoff berths. In the East, Brooklyn, Orlando and Washington are in the race for two spots. In the West, Memphis, Portland, New Orleans, Sacramento, San Antonio and Phoenix will jostle for one spot.

If the gap between eighth place and ninth place in either conference is four games or less when the eight-game slate ends, those teams will play off for the No. 8 seed. The team in ninth place would have to go 2-0 in a two-game series to advance.

“There is still much work to be done, but we are excited to be able to return to the court,” Wizards general manager Tommy Sheppard said.

For Atlanta, Cleveland, New York, Golden State, Minnesota, Detroit, Chicago and Charlotte, the season is over. The Knicks will miss the playoffs for the seventh consecutive season, the third-longest current drought in the league behind Sacramento and Phoenix — who still have chances of getting into the playoffs this season.

“While we are disappointed for our team and our fans that our season is coming to an end, we understand and accept the league’s plan to move forward with 22 teams,” Timberwolves President Gersson Rosas said. “It is important that we be a good teammate not only to the NBA, but to the other 29 teams to support the efforts to complete this season and prepare for next season in a healthy and safe manner.”

And with the Hawks done, it also means Vince Carter has likely played the final game of his 22-year NBA career — the longest in league history.

Carter, the first player in NBA history to appear in four different decades, plans to retire. He appeared in 1,541 NBA games, behind only Robert Parish (1,611) and Kareem Abdul-Jabbar (1,560) on the all-time list.