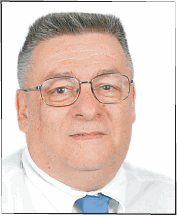 The initial recipients of the Maroon Knights’ Distinguished Service Awards, selected by the Hall of Fame Committee, were presented to Jack and Katie Fahey, along with the late Joe Bechtel at last year’s fete.

They will receive their awards when Central holds its annual Hall of Fame Brunch on Saturday, Oct. 3 beginning at 9 a.m. at Wheeling University’s Benedum Hall. The Wheeling Central Hall of Fame is sponsored by the Robinson Automotive Group.

His writings were entertaining, informative and very popular.

His work was so highly regarded that the OVAC media guide was dedicated to Bedway in 1999. It was just one of a truckload of honors he earned during his successful career.

Bedway served one term in 1977 as president of the W.Va. Sports Writers Association and received the Gene Morehouse Award in 1990 from the organization. He was inducted into the Ogden Newspapers 20K Classic Hall of Fame in 2006 and the Media Wing of the Ohio Baseball Hall of Fame in 1996. He twice was selected to serve as the Honorary Referee for the W.Va. Super Six Class AA state championship football games held at Wheeling Island Stadium.

Moreover, Bedway was the inaugural recipient of the Fr. John Lester Award for a lifetime of support to local sports and youth of the Ohio Valley and received the Spirit and Leadership Award from the Upper Ohio Valley Dapper Dan Club. He also has received awards from the Wheeling Soccer Association, the Allegheny Mountain District U.S. Tennis Association, Wheeling Post 1 American Legion Baseball Team, Oglebay Park Men’s Golf Club and the Ohio Valley Golf Association.

His work at the News-Register also included serving as co-publicity director of the OVAC Rudy Mumley All-Star Football Game from its inception in 1972 until 1990. He also served as the OVAC standings statistician in football, boys’ and girls’ basketball and baseball for more than 25 years.

Bedway also is active with the Wheeling Lions Club. In 2005, he received the Leonard Jarrett Award, the highest Lion honor bestowed in West Virginia. He has served the Lions Club as chapter secretary, board of directors’ member, media relations director, chapter president, first vice-president and tail twister.

Nick has been married for 58 years to Judy Katona Bedway. They have three children: Rachel, who lives in Charlotte; Becky in Stow and Trey in Milton, WV. One of their daughters, Michelle, died of cancer in 1990 at the age of 23. The Bedways have five grandchildren and one great grandchild.

James E. Altmeyer Sr. has been a lifelong leader, be it in the business world, political realm or community service.

The 1961 graduate of the U.S. Military Academy at West Point remained active in the service until 1972 as U.S. Army Command and General Staff College, Fort Leavenworth, Kansas. He left the Army with a rank of Major.

He subsequently graduated from the Institute of Mortuary Science in Pittsburgh, setting the foundation for a long and successful business career.

Altmeyer also enjoyed a lengthy stint in politics, emanating in 1974 when he was appointed to fill an unexpired term in the West Virginia House of Delegates. In 1975-76, he was elected to the House of Delegates, outpolling seven other candidates.

Altmeyer also found time to be a civic leader. In addition to serving on several bank board of directors, he remains a member of the Chambers Foundation of Wheeling as well as on the Wheeling Hospital Board of Directors.

Moreover, he has served as chairman of the West Virginia Veterans Memorial Commission, President’s Advisory Council at Wheeling Jesuit University and the Fire Department Civil Service Commission. Altmeyer was also a member of the board of directors for the Wheeling Chamber of Commerce.