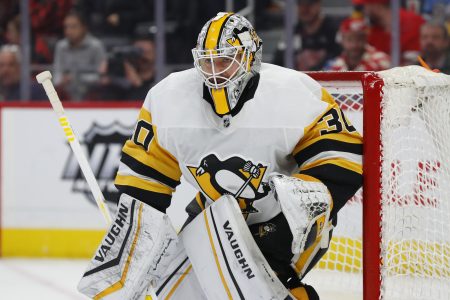 FILE - In this Jan. 17, 2020, file photo, Pittsburgh Penguins goaltender Matt Murray plays against the Detroit Red Wings in the second period of an NHL hockey game in Detroit. Murray says he's focusing on the NHL's return to play, not the potential economic ramifications on the league due to the COVID-19 pandemic. (AP Photo/Paul Sancya, File)

PITTSBURGH (AP) — Matt Murray’s legacy with the Pittsburgh Penguins — such as it is at age 26 — is secure, as. That tends to happen when you have your name on the Stanley Cup. Twice.

It’s the goaltender’s future, however, that is murky.

Not that Murray is thinking about the uncertainty that awaits whenever the “official” NHL offseason arrives. With restricted free agency looming and the economic fallout of the COVID-19 pandemic on the league’s open market unknown, Murray is trying to keep it simple. Go to the rink. Stay sharp. Just play.

“All I’m focused on right now is preparing myself to be the best I can be on the ice,” Murray said Tuesday. “The rest of it, it will take care of itself.”

Hopefully. Murray is currently working out with the rest of the Penguins in small groups during Phase 2 of the league’s Return to Play program. In a way, having only a handful of players on the ice at once instead of the full complement has sped up how quickly he’s reacclimated himself following the “pause” that began in mid-March as the coronavirus spread. Fewer skaters equals more shots. More shots equals more opportunities to try and take hold of what has been a somewhat muddled starting goaltender situation.

The Penguins, who finished in fifth place in the Eastern Conference this season, had an All-Star goalie on the roster. But it wasn’t Murray. It was Tristan Jarry, who rode a hot streak during the first half to an unlikely berth in the midseason showcase, and sparked talk of becoming Murray’s successor sooner rather than later.

Going by the numbers, Jarry was better during the regular season, and it wasn’t particularly close. He had a significantly higher save percentage and lower goals-against average than Murray. Yet Jarry remains unproven in the playoffs. Not Murray, who went 21-9 in the postseason in 2016 and 2017 as the Penguins became the first team in a generation to capture back-to-back championships.

That figures to give Murray an edge in the eyes of coach Mike Sullivan, who arrived in Pittsburgh less than two weeks before Murray made his first NHL start. Every time there has been any sort of intrigue in the goaltending situation, Sullivan has consistently turned to Murray. It figures to be much the same when the league resumes play with the Penguins facing Montreal.

As weird as it might look whenever the NHL resumes — 24 teams split between two hub cities, no fans in the stands, and a “bubble” designed to keep the players steer clear of the virus — Murray thinks when it comes down to it, it will still be playoff hockey. Just with a twist.

“This is, I think, the best option on the table, and we’re going to make the most of it,” he said. “In terms of preparation, I would say it’s similar to the normal playoffs. It’s just an extra (round) series. The fact that we’ve been off for such a long time kind of makes it feel a little bit more like a tournament and just kind of builds the excitement. It’s great. It’s the best that we can do in the situation. I know me personally and our team, we’re looking forward to the challenge.”