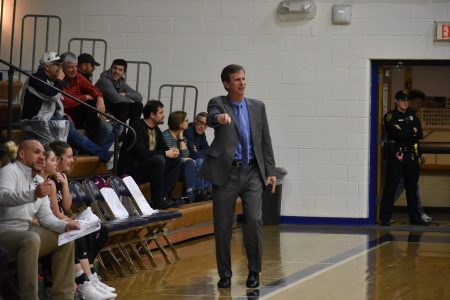 Photo by Josh Strope Wheeling Central girls’ basketball coach Penn Kurtz is calling it a career after 28 years at the helm. Kurtz led the Maroon Knights to the state tournament 25 times during his tenure, including three state championships.

WHEELING — He won at an extremely high level for an extremely long time. He also did it with endless class every step of the way.

Now after 28 successful seasons as Wheeling Central’s head girls’ basketball coach, Penn Kurtz has decided to retire after an amazing tenure at the East Wheeling school.

Kurtz guided the Maroon Knights to state crowns in 2004, 2008 and 2018. His well-drilled teams advanced to the state tournament a remarkable 25 times.

Wheeling Central captured eight OVAC championships under his adept tutelage, second most by a girls’ hoop coach in conference history. Kurtz has more than 500 varsity victories on his Maroon Knights resume.

Prior to assuming the Maroon Knights’ head coaching position, Kurtz was an assistant with the program for seven seasons.

“It just felt like the right time (retiring),” Kurtz, a youthful looking 65, said. “I have been coaching for 35 years. It just felt right.

“I think the team will be very good again next year. The one thing that intrigued me about possibly returning was the new classifications for next year. We would be playing some new teams.”

His retirement comes on the heels of another magical season. The Maroon Knights won the OVAC 2A championship and punched another ticket to Charleston despite being hit hard by the injury bug.

All-state guard and Columbia University-bound Eden Gainer was sidelined all season due to a knee injury. Bucknell signee Kaylee Reinbeau also missed much time due to an injury.

Moreover, Hannah White, headed to Cleveland State, delivered a superb season, bouncing back from last year’s season-ending ACL injury while playing much of this season through a host of injuries.

“We were 9-11 at one point and these girls could have quit. A lot of people gave up on us,” Kurtz said. “They kept working and kept getting better and we became a very good team again.”

Obviously, with scripting so much success, Kurtz harbors many cherished highlights.

“The three state titles are all special. The first one we beat Mercer Christian,” Kurtz recalled. “They were the state power back then. We were down eight and came back to win.

“In 2008, we beat St. Joe’s and beat them again in 2018. There are so many great memories,” the Medina, Ohio native said. “One of things I remember best is winning the games when we weren’t expected to.”

One of the things Kurtz relishes the most is the people he worked with and the support they provided.

“Larry Finneran was my mentor for seven years. I am thankful (Principal) Dr. Joseph Viglietta took a chance on me as a head coach,” Kurtz said. “All the athletic directors were great to work with and very supportive.

“The administration has always backed me. Wheeling Central is a special place to coach with special people.”

Kurtz, an Ohio University graduate, was supported by a quality staff this past winter – Roberta Olejasz and Paul Kurtz. Olejasz is a Wheeling Central Hall of Famer who earned a hoop scholarship to D-1 VCU. Over the years he has also been assisted by Bob Robinson, Suzie Dailer and Kayleen Fitzsimmons.

“If I had a daughter who played basketball, I would feel so secure in her learning from Coach Kurtz. I would also feel so secure because he’s a gentleman and treated the girls with so much respect and treated them as young ladies,” Young stated. “He has three daughters who are a beautiful young ladies and a wife that he treats like gold. I’ve said this before that Penn got more out of girls than anyone. He will be missed but always respected and remembered.”

Murray also had praise for Kurtz.

“Penn has had a very successful career numerically. Despite all of the numbers, I know where Coach Kurtz has had the most success. It is the lasting impact he has had on the lives of his players, coaches and the entire Wheeling Central Catholic community,” the current Central athletics director said. “Penn Kurtz is a tremendous coach but an even better person. I had hoped he would have stayed around 13 years for my daughter to be fortunate to play for him, but that was not in the cards. Coach Kurtz is a legacy guy and he will be greatly missed as we move into a new era of Maroon Knights girls basketball in the 2020-21 season.”

Penn and his wife, Jeanne, have three daughters: Abbey, Julia and Molly.