Patriots Begin to Get Back in Shape 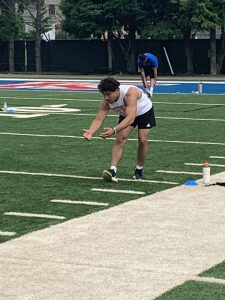 WHEELING — High school athletes at Wheeling Park began to ease their way back into shape and form Wednesday morning at Wheeling Island Stadium.

Athletes from basically every Patriots program took part in the non-sport specific workout, which was conducted by Patriots strength and conditioning coach Chris Dunaway.

The workouts, which lasted 60 minutes, began with freshmen football in the morning and went through most of the afternoon.

Because of the limitation on the number of athletes who can take part or be present at one time, the football team broke into three groups. Freshmen got things started and then varsity linemen and varsity skill were the second and third groups.

Some of the sports with smaller numbers, like basketball, were able to combine the boys and girls teams into one group.

With the help of Dunaway, who has worked as a strength and conditioning coach with several Major League Baseball organizations, the Patriots devised a plan to fit into all three of the SSAC-suggested phases.

“We thought having all of our student-athletes workout through (the stadium), was better than having one group here and one group somewhere else because of all of the things involved in cleaning of facilities and such,” Patriots football coach Chris Daugherty said. “We’re lucky to have Chris Dunaway, who has been a professional strength guy.”

Ohio County Schools Assistant Superintendent Rick Jones immediately put together a “task force” of administrators and coaches to begin to plan the Patriots’ course of action.

“We didn’t have much time and we knew both the kids and coaches are anxious to get back (to sports),” Wheeling Park athletics director Dwaine Rodgers said. “We thought about pausing, making sure we had our acts together, but then we thought, let’s get this going as quickly as possible.”

West Virginia schools were actually permitted to begin workouts on Monday, but that turnaround was simply too quick for the Ohio Schools Schools to formulate a plan for all of the logistics.

“We had to figure out which teams wanted to take part,” Rodgers said. “We are basically saying (to our teams) that they need to taking part in this portion in order to be able to fully take part in phase three, which is the out-of-season coaching.”

Some of the restrictions in place include each coach is required to wear a mask during the duration of his or her team’s workout and each athlete must bring his or her own water.

“I know there are people out there who are thinking these guidelines and rules are all about a bunch of bologna,” Rodgers said. “Well, this is our job and we’ll work hard to follow these guidelines as they’re laid out. Some may think the masks are stupid or whatever, but we’re asked to wear them here, and we will. In order, for us, to move to Phase 2, we have to do what’s right in Phase 1.”

Prior to arriving at the stadium, each athlete was given an assigned gate to enter, which was to help avoid congregating and having too many people in one area. The athletes are in that pod during the entire course of the workouts.

Normally, the summer coaching window, which lasts three weeks in West Virginia, is staged in June. However, because of the pandemic, many schools, including Ohio County, have elected to push that window to July.

“There are new guidelines and restrictions on that three-week window, too,” Rogers said. “We’re not allowed to wear helmets, shoulder pads and we can’t compete against other teams or schools in scrimmages or 7 on 7s.”