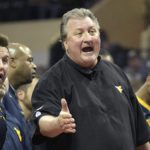 MORGANTOWN — Veteran West Virginia coach Bob Huggins begins his second decade as the leader of the Mountaineers as the third winningest active basketball in the country with a team that was ranked No. 11 win the preseason polls came out.

So far this season, they are off an running toward another berth in the NCAA tournament in March.

“We still have a long way to go before we even think about that,” Huggins said with a laugh. “We are still very, very young and we still have a lot of growing to do. But, I’ve liked some of the things I’ve seen out there. Just not all of it.”

And, as if that were not enough, a recruiting class which included former South Charleston High School standout Brandon Knapper, junior college transfers Wesley Harris and D’Angelo Hunter and freshman Teddy Allen had many fans wondering if this would be the team that would finally dethrone perennial Big 12 champion Kansas.

That all changed, however, in the blink of the eyes when Knapper, who averaged 28.5 points, six assists and 5.4 steals per game while at South Charleston, was lost for the season with a knee injury suffered in a pickup game and Ahmad, who was second on the team in scoring at 11.3 ppg and averaged 4.3 rebounds per game, was declared an academic casualty and won’t be eligible to play until January.

“The loss of Esa (Ahmad) and Brandon (Knapper) hurts,” Huggins said. “But, as coaches, these are issues you learn to deal with. It’s becomes a ‘next man up’ approach and you coach the guys who are here to play at the level they must reach for us to be successful.”

Fortunately, the longtime coach has Carter back to show the younger players what he expects to see when he looks out onto the hardwood.

A senior, Carter has seen his name appear on just about every preseason watch list. Most recently, the Illinois native was one of 50 players selected to the Wooden All-American watch list.

“That’s preseason,” Carter said. “They don’t really mean anything until the end. Right now, I’m trying to become more of a vocal leader so our team can have the success we all want.”

Carter enters his final season in Morgantown coming off of a junior campaign which saw him average 13.5 points, dish out 137 assists and come away with 92 steals.

Joining him in the backcourt will be Miles, who scored a career-high 32 points in a victory against Morgan State. A preseason All-Big 12 honorable mention pick, the Maryland native averaged 8.8 points and 2.5 rebounds during WVU’s 28-win, Sweet 16 appearance a year ago.

Replacing Carter and Miles at the guard slots will be ‘Beetle’ Bolden and Harler.

Bolden scored a career-high 19 points in a loss in the opener to Texas A&M. A fan favorite, the Kentucky native shot 46.4 percent from the field and 44.9 percent from 3-point range last season.

Harler averaged 1.4 points per contest in 5.9 minutes of action. The sophomore’s role has changed, however, and now he is expected to supply solid minutes when Carter or Miles is on the bench.

“I knew coming into the season that my role had changed,” Harler said. “I’ve worked very hard on the things coach wanted me to work on during the summer and I think I’m ready to go out there and contribute.”

Inside the paint returns Konate, Routt and Bender. The trio averaged just a little over seven points a game in 2016-17. Konate did set a school record for freshmen with 53.

Looking to replace the point production lost with Ahmad is West. The Cincinnati native played in all 37 games his freshman season, scoring a career-high 23 points in a victory over Texas.

“We’ll see,” Huggins said. “It’s a long season and, with our style of play, it can be a very difficult one if a player isn’t prepared to work hard every day in practice.

Time Is Now for Panthers

Patriots Look for Bounce Back Season

By JOSH STROPE WHEELING — Wheeling Park isn’t used to too many 9-15 seasons, but that is just what happened ...

By SETH STASKEY SHADYSIDE — Serge Gentile called his first season at the helm of the Shadyside girls’ ...

STEUBENVILLE — Steubenville Catholic Central’s girls’ basketball team had a banner season a year ago. The ...