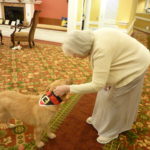 The newest resident at Elmhurst, The House of Friendship in Wheeling is friendly but quiet, has a calm demeanor and a docile nature and enjoys treats.

Goldie arrived at the senior living residence Nov. 28 and is now entering her third week as an official member of the Elmhurst family. The dog, who is thought to be 4 or 5 years old, had lived most recently at the Belmont County Animal Shelter.

The new addition is a golden retriever-husky mix. Her mixed heritage can be seen in her visage: she has one brown eye and one blue eye. Marilyn Mull, director of marketing at Elmhurst, observed that Goldie’s eyes began looking happier as she settled in to her new home.

Angela Hatfield, a representative from the animal shelter, matched the beautiful dog with the Elmhurst staff and residents. During a trial visit, the sweet pooch was deemed to be a perfect fit.

Hatfield brought Goldie to the home for a “get to know you” visit. “As soon as she walked in, we knew she was the one,” Crow said. “She’s probably the most laid-back dog we could have found.”

The good girl, who became acclimated to her new surroundings swiftly, greets people in a friendly, gentle manner. “She has really quickly become a part of the Elmhurst family,” Crow commented.

Although Goldie remained silent during an interview last week, a human interpreter shared her first impressions. She thought she had gone to “doggie heaven” when she first set paw in the historic Samuel S. Bloch mansion.

Through her interpreter, Goldie said her initial reaction to seeing the spacious, beautifully decorated residence was: “This is my new home! How did I rank this?”

The executive director figures that in just a short period of time, Goldie probably has encountered more people than any time in her whole life. “She has so much human interaction,” Crow said, noting that many visitors attend events at Elmhurst during the holiday season or present Christmas programs for residents.

Goldie, enjoys meeting people, “is becoming more familiar with the environment” at the bustling senior living residence. She approaches residents calmly and waits patiently for them to pet her. Visits by a mail carrier or a package deliveryman pique Goldie’s interest — with good reason on the day that the FedEx man brought a box containing her Santa bandanna!

In only a short time, Goldie has become comfortable with all of the staff, following them on their rounds, listening to their commands and, naturally, accepting the occasional doggie treat. “She’s very close to Samantha Kestner, our program director,” Crow said. “She has lots of moms and dads and grandparents. She gets so excited.”

Goldie knows to walk beside the humans, not jumping in front of them or getting in their way. She is unfazed by canes or walkers being used by some of the older folks. She seems to enjoy accompanying them as they check their mail slots or walk to the activity room.

“She has been such a good fit with the residents. That’s what it’s all about,” the executive director commented. “The majority of the residents had pets. Some of them had to give up pets when they came here. For them to have interaction with a dog is good.”

Many assisted living residences in West Virginia and across the nation have adopted canine companions. “Having a dog helps the residents become more social,” Crow said. “Some of our residents who won’t come down (from their rooms) for activities just come now to see Goldie.”

Goldie spends her time on the home’s ground floor. She sleeps in a dog crate in an administrative office. In addition, a blanket and water and food bowls have been placed behind the reception desk for her convenience.

“She can go upstairs, but only with a staff member,” Crow said. Goldie is not allowed in the kitchen or dining room.

“When staff make the rounds, they take her with them,” she added. “It’s company not only for the residents, but also for the staff.”

For the daytime staff, “it’s sad when we go home at night. She’s very attached to us. It’s almost like she’s sad when we leave,” Crow related. Acquiring a resident dog wasn’t an overnight project for Elmhurst’s administration. “This was a long, involved process,” the executive director said. “We have been waiting for just that perfect fit.”

And, for Goldie, finding a happy new home filled with plenty of loving folks is the best Christmas gift of all.

December Boomers and Beyond

Tips Offered for Destressing the Holidays

Many people enjoy the holiday season. Shopping for special gifts and wrapping them, sending greetings, searching ...

The importance of a financial power-of-attorney cannot be overstated. I make it a point in all of my client ...

People living with serious illness who receive palliative care have better quality of life and fewer symptoms than ...

Family members who live nearby often don’t notice the slow and subtle changes that might mean Mom or Dad needs a ...

The National Association of Area Agencies on Aging, in collaboration with AARP Foundation, has launched a national ...

How Much You’ll Pay For Medicare in 2017

Dear Savvy Senior, I know there won’t be much of a cost-of-living increase in Social Security benefits next ...