WHEELING — It was something that Ron Green heard consistently. Often when he would ask folks he knew — and some he didn’t — if they would be interested in running his race, the Debbie Green 5K Run/Walk for Leukemia, Green was told ‘I’d like to, but I don’t have anything to do with my kids.’

”We keep the fee there so kids can understand what it’s like to give, whether it’s to somebody who has cancer or has lost a home or whatever else.

”It’s one of the reasons we decided to do it.”

It’s not just about learning to give, however. The 100-yard dash event encourages children ages 9 and under to get outside and be active.

”As a country, we need to exercise more,” Green said. ”Plus, we have all kinds of door prizes and refreshments that can be won.

”I love seeing that look on their faces when that music is blaring and they are getting loosened up and ready to run.”

Eventually another familiar conversation is had.

”Then I have kids say ‘I will be 10 next year so I will have to go run in the big race now,” Green said. ”It’s really great to hear that.

”It gets in your blood.”

One of the neatest things, Green said, is actually seeing children who have run in Debbie’s Dash grow up and have success running during adulthood.

”Ricky Moore, case in point,” Green said of the Wheeling Park grad and eventual collegiate All-American at Wheeling Jesuit. ”I watched him go from running in high school, to winning this race five times and now being on our committee.

”He was the type of guy who would run against anyone, from anywhere. He didn’t care.

”It’s really nice to see people like Ricky have success.”

Debbie’s Dash will be run at 5 p.m. Saturday. Registration is from 3-5 p.m., with additional signup opportunities available Friday. Shirts, cookies and pizza are guaranteed to the first 150 registered, with ice cream also available by Brynn E. Bears.

The Debbie’s Dash Grand Prize: win a trip to Kind’s Island at the Great Wolf Lodge and Water Park. Trip includes overnight stay and four park tickets, which must be redeemed by Nov. 1, 2017 and are non-transferable. Additional prizes include two boys’ and two girls’ bicycles — donated by Terry Whitecotton — as well as Toys ‘R Us gift certificates and more.

By RICK THORP WHEELING — Another crop of elite talent is in line to grace the streets of downtown Wheeling on ...

By KYLE LUTZ WHEELING — Kalkreuth Roofing and Sheet Metal has been sponsoring events around the Ohio Valley for ... 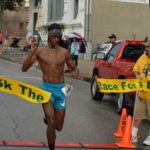