The main event for the Debbie Green Memorial 5K Run and Walk will start and finish at Wheeling’s Heritage Port at 14th and Main street. The race is an evening event with start time at 7 p.m. Saturday, Aug. 6. The course is USATF Certified. This race has been voted TOP 263 road races in the world by BestRoadRaces.com.

The Debbie Green 5K has become one of the region’s popular racing events. Top high school and college athletes are among its participants as are some of the best race runners and walkers in the region.

“The Debbie Green 5K has always been a top notch event attracting some of the fastest runners in the region. We are happy to once again be working with the race to host the RRCA National 5k Championship,” Knaack said. “The race always does a great job engaging the local community as well as connecting to the national running community. “

Last year’s champion and course record holder, John Wanjiku, a native of Kenya, will be back this year. Also, Mourad Marofit, who set the course record in 2013, also is headed back to Wheeling.

Some of the other elite runners set to participate are:

∫ Aaron Dinzeo, who is training in Colorado, was on the 2016 Pan American CC Championship team.

∫ Guris Silenieks of Pittsburgh, ran at Syracuse and was a member of the 2015 ACC CC Championship team.

∫ Askale Marachi from Ethiopia, is among the female favorites, who performed the 5K best at16:29.

∫ Daisy Kimeli, who clocked a 16:02 in a 5K in Kenya, is making her American debute.

Dwight Mikulis, RRCA eastern region director, agrees that the Debbie Green 5K attracts some very good and competitive runners from across the country and the globe.

“The Debbie Green Memorial 5K is very competitive with national and international runners running very close to 4 minutes 35 seconds per mile for the 5 K.  Last year’s winner, John Wanjiku, who is a young runner, almost broke 14 minutes for the course. We will be excited to see if he is back to defend along with other top talent.” 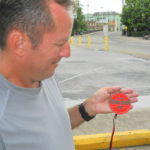