Elizabethtown Festival Will Expand Its Offerings

MOUNDSVILLE — The 19th annual Elizabethtown Festival is planned for Sept. 16 at the Moundsville Center, inside the walls of the former West Virginia Penitentiary.

The festival celebrates the traditions and customs of the past with bread making, quilt displays, weaving, and many craft items for sale.

In 1999, the Moundsville Economic Development Council (MEDC) sponsored the first Elizabethtown Festival celebrating the long-forgotten town Joseph Tomlinson, an Irish immigrant’s son, established in 1738 and named in honor of his wife, Elizabeth. Elizabethtown was the first settlement on the “Flats of Grave Creek” and the Tomlinson family built their dwelling near the site of the Moundsville Middle School.

Elizabethtown merged with neighboring Moundsville to become one town in 1866 and on Feb. 23 of that year, the first city officials of the town were named with many family names still local to the area today.

The Elizabethtown Festival, originally offered as an 1800s heritage festival, has grown to now include items from the past to the present.

Demonstrations of historic trades, food and musical entertainment, along with a cookie and apple pie baking contest, “Anything BUT Chili Soup Contest” and historical memorabilia displays make this event perfect for the entire family. Admission is free!

This year, organizers are collaborating with the Uptown Moundsville Activities Committee Fall Festival to hold a large one-day event with a car and motorcycle show. By joining together, the two groups will offer more unique shopping and demonstration opportunities, along with giving locals and travelers more reasons to visit the area. 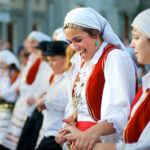 Greece Comes to You in Wheeling

WHEELING — Building on the success of its long-standing Mahrajan, Our Lady of Lebanon Church in Wheeling is ...

WEIRTON — The St. Joseph the Worker Catholic Church Italian Festival will be held from noon to 8 p.m. on July 30 ...