Central Loaded For A Run at Another Ring 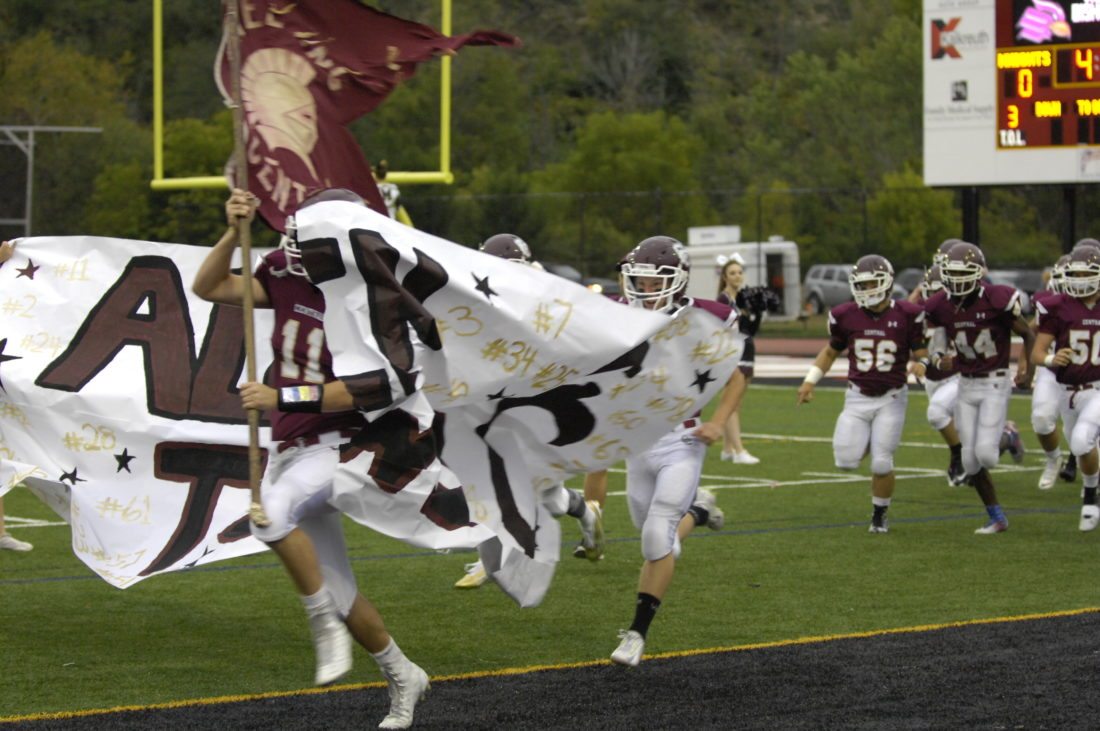 WHEELING — Perhaps nobody in the Ohio Valley knows winning on the football field like Wheeling Central coach Mike Young. The owner of five West Virginia Class A state championships, Young acknowledges being blessed.

During the 2017 season, one could make the argument that Young has been blessed with his deepest squad to date. Several prominent players graduated from a team that went 9-2 and reached the state quarterfinals, but there is plenty of help on the horizon.

”We had great skill and quality kids last year,” Young said. ”This group coming up is going to make its own name … I believe that.

”We’ve got a challenging schedule, but I think with the depth we have, the attitude we have and the scheme we have, I think is going to be very positive and get us where we want to be.”

The defense will have a lot to say about that. That side of the ball is an embarrassment of riches, particularly at the Single-A level.

”We’re changing it up this year with what we do a little bit,” Young said. ”The key to our defense this year is going to be having the right kids on the field.

”We have so many kids that are athletic and quick that I think defense could end up being a real strength for us.”

The front seven is going to make it difficult to run. There’s beef and athleticism at every position.

Senior Luke Lawrence (5-8, 205) and juniors Vinny Mangino (6-2, 240) and Logan Wells (5-8, 210), both of whom enrolled at Central when Bishop Donahue closed, can play either defensive end or outside linebacker.

And if you’re keeping score at home, sophomore Adam Murray (6-0, 205), another hybrid player, hasn’t even been mentioned. All he did was lead the team in tackles last season as a freshman and is poised for an even bigger campaign.

”We feel very confident about our defensive interior,” Young said.

”Any of those guys could also go inside,” Young said.

”I can honestly say that I personally have a rejuvenated attitude this year in terms of being excited and doing things a little bit differently. This is my 46th year — I started in 1971 — and I am blessed to be where I am,” Young said. ”And I am even more blessed because of the coaches I have with me, because of the kids I get to coach … because of the administration and teaching staff.

”There’s so many things. You take our parents, football moms, boosters … it’s a huge, very supporting cast. When you have that, your expectations are higher because everyone is all in.

”When you have so many people invested in your program, you definitely get a power of strength. When you’re strong you have beliefs that you are going to do good and come out on top.”

Offensively the Maroon Knights have some key contributors to replace, but it looks as though they have the people in place to do so.

Price, who was clocked at 4.4 seconds in the 40-yard dash at Ohio State’s camp, returns at running back after rushing for more than 600 yards last season. He’ll be joined in the backfield at any given time by the likes of Murray, Wear, Kahle, Wells and Mangino.

”We’ve got some horses and we’re looking for them to contribute in every way possible,” Young said.

Up front the Knights will be challenge for just about everyone on the schedule.

”We have a very good line that is aggressive,” Young said. ”If we can get them off the ball and knowing their assignments, we’ve got a bug that can get loose on the rug, and that’s No. 4, Bray Price.”

Duffy, Lawrence, Denniston, McCabe, Roth, Runkle, Duplaga and sophomore Hayden Manns (6-1, 225), who Young is high on, will all see time.

”A force that has done great in the offseason and really worked hard, is Luke Duplaga,” Young said. ”He’s gotten stronger.

”When he’s a guard he pulls well and when he’s a tackle he blocks down well.

”We feel very confident in what we have up front.”

That group will be protecting a new quarterback. McGhee and senior Blake Peluchette (6-0, 165) were locked in a preseason battle. They were being pushed by promising freshman Caleb Karnell (5-9, 133).

”Both (McGhee and Peluchette) are quality athletes and very versatile athletes, while Karnell is also taking some snaps,” Young said.

Robbins will line up at tight end, where Mangino and sophomore Michael Horan (5-11, 185) could also see time. At the receiver position are sophomores Jaylen Creighton (5-10, 160) and Jacob Rine (5-5, 115), along with Threets and Peluchette, if he doesn’t win the quarterback competition.

Vying for punting duties are Brown, Wells and Murray. Jack Stryker, a 5-11, 148-pound senior, is the returning kicker, though Young also has confidence in Rine and fellow sophomore Peyton Anderson (5-4, 155).

”If we can keep them together — the chemistry of a team is huge,” Young said. ”You can have a variety of personalities and attitudes, but when it comes to playing four quarters of football you’ve all got to be on the same page.

”I believe these kids will have that passion and that heart to go out and play with the intensity that is needed to play this game.

”We’ve been 9-2 the last two years. We’ve been in the playoffs all of my years here except one. So in 17 years, to not make the playoffs one year? I don’t know how many schools in Single-A can say that.

”It says a lot for the program and for what we do.”

By TRACY WATSON BOWERSTON — There have been plenty of things missing in the Conotton Valley football program ...

By KIM NORTH BELLAIRE — It had been awhile since Bellaire fans had something to cheer about at Nelson Field. ...

By CODY TOMER HUNDRED—First-year head coach Shane Minor has already been dealt a heavy blow and the season ...