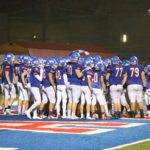 WHEELING — After winning a state championship in 2015, expectations for Wheeling Park have reached new heights. Even a first-round playoff loss last season has done nothing to diminish what many predict to be a deep playoff run for the Patriots this season.

The Patriots return 15 starters from last season’s 7-4 squad and Coach Chris Daugherty said that has gone a long way into helping the team get off to a solid start in practice.

“I have been real happy,” Daugherty said. “We have a lot of kids returning from last year so that helps the mental side of football go a little bit faster. Especially offensively. The way you practice, getting three weeks in the summer, it has changed your install plans. We are real happy with where we are right now.

One of the biggest question marks after last season was where was quarterback Cross Wilkinson going to end up playing college ball? Wilkinson answered that this summer when he verbally committed to the University of Toledo. Now his sole focus can be on Wheeling Park,

“That was a huge thing and he wanted to do that and make sure the process is over before the season started,” Daugherty said. “Now he doesn’t have to worry about every throw. If you are a quarterback, you are going to throw an interception. You are going to throw a bad ball, those things happen. A corner, you are going to give up a touchdown. A wide receiver is going to drop a ball. Now he doesn’t have to worry about if someone is at the game. He can just go and play football and win games for us and he has won a lot of games for us.”

And put up a lot of stats. Last season, Wilkinson, a first team all-state selection, threw for 1,790 yards and 19 touchdowns as a junior and became the school’s all-time leader in those categories.

“I throw a lot on his plate, more than any other quarterback that has been in our system,” Daugherty said of his 6-foot-3, 205-pound signalcaller. “It is so nice to have him make those decisions on the field and get people in the right place on the field. It is like having another coach out there.”

Backing him up will be junior Tyler Porter or sophomore Alex Dunlevy.

Wilkinson has a solid group to throw to, led by senior Nate Phillips (5-11, 170), who hauled in 51 passes for 647 yards and six touchdowns before an injury derailed his season. Phillips has offers from seven colleges.

“I am really happy with how Jack Stakem has progressed,” Daugherty said. “Logan Tucker seems to catch the ball every time, knows where to be. He is a ‘Steady Eddie’ and gives great effort. TJ Reed has missed some time with injuries in the past and has an injury to his collarbone now, but we expect to have him back and he will be play a lot for us.”

Senior Rennie Clark had the unenviable task of replacing Savion Johnson last season, but the 5-11, 195-pounder showed he was more than capable of being a lead back. He finished with 1,344 yards (149.3 per game) and 18 scores.

This year he will be joined in the backfield by Donnie Evans, a 5-9, 165-pound speedster that transferred from Texas.

“Donnie can run, he’s fast and we think he can play a couple different places for us,” Daugherty said. “Definitely Rennie and Donnie will be on the field together. When you look at when we had Savion Johnson, he was beat up and missed games. Rennie missed two and a half games last year. Had he not missed those games, he might have been a 2,000-yard runner, who knows?

“So it is nice to have that other back to take some of that beating. You will see both of those guys and hopefully that means we will be healthy late in the season. We also like Raphael Bradley (5-6, 175), a young sophomore guy that I feel comfortable with if we need to go to a third back.”

“We are little bigger than we have been,” Daugherty said.

At linebacker, Jordan Aldridge (5-10, 200) and Jermain Snodgrass (5-8, 205) will control the middle of the defense with Daugherty still looking to find another starter or two.

Phillips is back in the secondary, as are Devaughn McWhorter (5-8, 145) and Justin Levelle (5-9, 160). Clark or Evans are being looked at currently as safety, but Daugherty hopes that will change.

“We need to go and find a safety,” he said. “Donnie and Rennie are penciled in there, but we hope someone steps up to replace them because of how we are going to need them on offense.

“Where we are defensively, I am happy. We have some new faces and you think that might slow us down, but that hasn’t been the case. They have picked things up quickly and I like where we are. (Defensive coordinator) Keith Phillips and our staff — Rick Marsh, Tim Ickes, Andy Seals and Jack Doyle — they do a great job on that side of the ball.

Chase Gheen, who will be the only four-year letterwinner in the history of Wheeling Park football, will handle the kicking duties.

Wheeling Park will begin the season playing its home games at West Liberty University, starting with tonight’s game against Brooke, because of construction at Wheeling Island Stadium. The Patriots hope to return to the island before the season ends.

“University is going to be very good,” Daugherty said. “They are in the same position we are. Brooke is Brooke. That is a rivalry and that will always be a rivalry. We open with them, then go to Bridgeport, who some can argue is the best program in the state. What they do is definitely unorthodox.

“When you start looking at our first three or four games, it is going to be very important to get off to a good start. But I feel comfortable and I feel ready.”

By TRACY WATSON BOWERSTON — There have been plenty of things missing in the Conotton Valley football program ...

By KIM NORTH BELLAIRE — It had been awhile since Bellaire fans had something to cheer about at Nelson Field. ...

By CODY TOMER HUNDRED—First-year head coach Shane Minor has already been dealt a heavy blow and the season ...