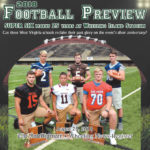 WHEELING — When you say “Super Six” to most people in West Virginia, they know immediately what you are talking about.

The Super Six is more than just a few football games. It is an experience. It is a destination. It is the goal of every player that straps on a helmet when practice begin in late July.

The home of the Super Six is Wheeling Island Stadium, where the games will be played Nov. 30-Dec. 1 for 25th straight year.

West Virginia Secondary Schools Athletics Commission Executive Director Bernie Dolan is one of the people that has played a big part in the Super Six during its tenure.

Dolan wore many hats during his time in Wheeling. He was an assistant superintendent. A principal. Athletics Director. Math instructor. Assistant football coach. Served on OVAC and SSAC boards, as well as being the director of the state golf tournament and, of course, the Super Six.

But also, and maybe most important, a fan.

“The Super Six is such a great event and really holds a special place in my heart,” Dolan said. “The community, the county, city, school system have continued to work together and that can be unusual in this day and age.

“The biggest thing that makes this so special, along with the visitors and all the financial support from the sponsors, is the volunteers. We couldn’t have put this together for 25 years without those volunteers and there are volunteers that will have worked all 25 years.”

One of those volunteers that has been integral to that is Wheeling Park equipment manager Sarge Cordery.

“He is one of those guys where he just wants to do everything he can where a kid walks in there and just goes ‘Wow!’ “ Wheeling Park football coach Chris Daugherty said. “This is like a NFL-type of thing and he doesn’t have to do that. He takes that extra step and puts in all that extra time to make sure that the locker room is perfect, not for that team, not for that coach, but for that high school kid that is 16, 17 years old and is going to remember that game for the rest of his life, and probably walking into that locker room for the rest of his life.”

The Super Six spent a number of years in Charleston before Sam Mumley and Eric Carder worked their magic to bring the event to the Friendly City.

Those words still ring true today as anyone involved with the weekend puts the student-athletes first and foremost.

“The banquet that Undo’s puts on, the gifts that the community gives, it is just a great atmosphere for the kids to be a part of,” Dolan said. “Sam Mumley, Eric Carder, they wanted to make it a little better each and every year.

“Along with Howard, that is something they passed down. They are no longer with us, but guys such as (Super Six co-directors) Dwaine Rodgers and Greg Stewart are continuing that legacy.”

The event has never failed to put people in the seats as even the casual football fan will stop by to take in a game. Fans from all over the state fill Wheeling to cheer on their squad.

For the local squads that are lucky enough to play in the game, it also gives a sense of “home-field advantage,” playing in a familiar building.

Since the Super Six has been played at Wheeling Island Stadium, 16 local teams have raised a championship trophy from six different schools. Twelve have also made the big game and come up short.

Magnolia can claim a state trophy in two different classes, winning Class AA in 2010 and Class A in 2015.

The Super Six has even seen a matchup of two local schools vying for the crown — Wheeling Central bested Madonna, 34-7, in 2005.

Mike Young has been the head coach at Wheeling Central for six of those titles, taking over in 2005, following the death of Jim Thomas.

Needless to say, Wheeling Island Stadium has been good to the Maroon Knights, whose lone loss in the title game came to Moorefield in 2001.

“I remember when it was originated through the efforts of Sam Mumley and Eric Carder to bring it up here,” Young said. “I was a great supporter of Sam Mumley. Our community of Wheeling embracing that opportunity and every year trying to enhance more, it says so much for our hospitality, our treatment of kids, our community involvement, all the bells and whistles that goes with it.

“I go to Charleston every year for state basketball and track, as an A.D. I have been around all the other towns that host. To see (the Super Six) in Wheeling and to see them maintain that, it says so much about our city, our county, our stakeholders and corporate sponsors. It is a class act. I don’t know of another town in West Virginia that could do as well as Wheeling does.

Young has yet to lose as head coach of Wheeling Central during the Super Six. For many years, the Maroon Knights played their home games as Wheeling Island Stadium.

The team that currently plays its home games there is Wheeling Park.

The Patriots claimed their first state championship in 2015 with a 23-15 victory against Capital. It was a moment Daugherty said he will never forget.

“To be able to do it in front of fans that filled the stadium up and the fun began as soon as the game was over,” Daugherty said. “It was a special day and I think it is a special day for anyone that wins it. But to do it on the same field you play, you practice every day, it was extra special.

“We think it is the best venue in West Virginia. You have Morgantown and Marshall that would probably be too big. We are the perfect size. There is no track running around the outside and the fans get to be as close to the action as they can.

Daugherty also echoed the same sentiments as Young, giving a lot of credit to those behind the scenes.

“The work ethic here in this valley, when they get on board with something, all the people that volunteer their time to make something not just happen, but make it great,” Daugherty said. “The whole idea, going back to the very beginning, was to make something great for the kids. I think they have done that to the point that I don’t know if it can be done anywhere else.

“There might be a day when it leaves Wheeling, but I know it won’t be the same game.”

A former Park football coach, Dolan said watching the Patriots win that title for him personally was his favorite moment in 25 years full of great memories.

Dolan, along with many others, will think back to 1999 when both Kennedy Award winners — Nitro’s J.R. House’s and Weir’s Quincy Wilson — led their teams to their respective state title games.

House and Wilson rewrote the record books, with House and Nitro having to outduel Morgantown and Notre Dame recruit Chris Yura, 69-54.

Wilson’s Red Riders had some late-game magic to hold off Dupont, 20-17. It was the final game coached by the Red Riders’ Wayne Neely. Not a bad way to ride into the sunset. To throw more salt in the wound for their opponents, it was the final year of existence for DuPont, the school whose most famous alumni is new Pro Football Hall of Famer Randy Moss.

John Marshall’s 29-22 victory against Capital was the lone state championship in school history and the exclamation on a Hall of Fame career by former coach, the late Mike Linsky.

Two other legendary coaches in Ohio Valley history were also able to capture the title before they hung up their whistle — Magnolia’s Mark Batton (2010) and Madonna’s Bob Kramer (2009).

OVAC members Morgantown (2000, 2002, 2004, 2005) and Parkersburg South (2003) captured state championships at Wheeling Island Stadium, albeit before either school had joined as a member of the conference.

And while Wheeling has done its part to make the event special, Dolan was quick to point out that has not been lost among the other state tournaments. Wheeling has raised the bar.

“I think the biggest effect is the model it has played among the other venues,” Dolan said. “Beckley with soccer, Cabell Midland with cross country, among others, these places look at the benchmark Wheeling has set. They try to put on great events, too. They see the impact the Super Six has had in Wheeling and they look to make their events just as important to each community.”

The Super Six will be held in Wheeling this season and next, before the next bid comes up to secure future games.

Rockets Want To Be Better Conditioned for 4th Quarter

Lowery Takes Over as Coach at Cambridge

By BUBBA KAPRAL CAMBRIDGE — Josh Lowery did a superb job of leading Cambridge as a quarterback. Now, the ...

Nowhere to Go But Up for Warren

By KYLE LUTZ WELLSVILLE — In Rob Ramsey’s first year at the helm at Wellsville, he experience some growing ...

Beaver Local Is Older, But Inexperienced

By TRACY WATSON LISBON — Beaver Local ran off six wins in its first seven games of 2017, establishing itself as ...