Thousands of people each year come to visit the Dickens Victorian Village in downtown Cambridge, but there are other activities people can enjoy during the holidays in the city as well.

For example, the annual Steeple Walk, which highlights the beautiful architecture of Cambridge’s churches, is slated from 12:30-2:30 p.m. Dec. 3. This free tour allows people to enter various churches near Steubenville Avenue for self-guided tours. Participants can ask questions of congregation members on hand at each church. Comfortable walking shoes are suggested.

Also, Cambridge’s Christmas Parade is slated from 5-7 p.m. Nov. 26 in the downtown. Before watching the parade, people may want to check out the Dickens Victorian Village on Wheeling Avenue.

Some other events include:

The popular Dickens Victorian Village is taken from the pages of Charles Dickens’ “A Christmas Carol.” Created by Dickens Universal, the 67 handmade, life-sized scenes are on display now through Dec. 31 on Wheeling Avenue in Cambridge. The village scenes coincide with the Guernsey County Courthouse light show.

“Some think that the scenes are placed on the street in the fall, returned to storage, and then magically appear again the next year. This is not the case, as much hard labor in many areas is necessary to repair the winter damage,” said Beverly Kerr, publicity chairwoman and director of Dickens Group Tours.

“The Creative Team, who make and maintain the mannequins, works year around so the figures will look excellent when placed on the streets in early November. There’s usually a month off in January to let them dry out from snow and rain. Then the work begins.

“Last winter wasn’t a terrible winter, but still, freezing and thawing plus the wind caused great damage to heads and clothing alike. ‘The Travelers’ scene provides a great example of some of the possible problems to be encountered,” Kerr added. “The lady needed a new skirt this year and it has been discovered that upholstery material is often one of the best choices. Cotton does not hold up well. Donated clothing is used as often as possible. Making new clothes requires time at home at a sewing machine as well as time in the warehouse, where mannequins are stored.”

The idea was conjured in 2006 by a local businessman, Bob Ley, and his wife, Sue. Bob Ley began sketching the scenes and created the first figure with wooden 2X4s and clothing that he made. Today, the figures’ heads are made from artists with the Eastern Ohio Art Guild.

“One very time consuming detail happens when each item has to be tacked down, or they would blow away when on the street. For example, a scarf must be stitched meticulously to the jacket. This could take a couple hours to make it secure enough to hold through the strongest wind,” Kerr said.

“Their heads need some repair each year. Often it is just a touch-up of paint, but sometimes the weather causes the clay used in making the heads to crack, much like our highways. When water gets in that crack, it expands creating bigger problems. Paint cracks and varnish turns yellow, so repairs are necessary if they are to look presentable on the street in November.

“Once in a while the entire side of a face may peel off, causing either cracks to be filled or a new head to be made. Hats in some ways protect the heads, but in others they cause a problem as mildew forms under the hats, which tend to hold dampness.”

Kerr noted the scences all are on raised platforms to them off the ground and make them more visible on Wheeling Avenue. She noted the work is done inside the former Universal Pottery building, hence the name Dickens Universal. 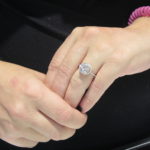 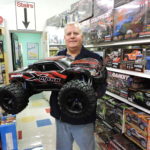 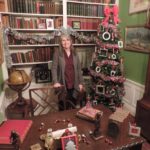 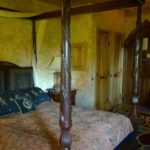 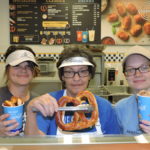