Artist Uses Nails as Her Canvas 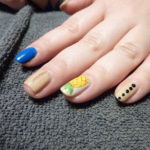 For a talented nail artist, fingernails and toenails function as miniature canvases — ready to display the technician’s artistry and imagination, along with the client’s sense of adventure and style.

One such technician, Lydia DeChiazza, also is an artist in her own right, having studied art in high school and college before taking courses in nail art. She is employed at Frederick’s Day Spa Salon in Wheeling, where she designs and creates nail art while performing manicures and pedicures.

Spring and summer are particularly busy times for nail artists because of prom season, weddings and beach vacations. Right now, customers are seeking summer designs or bringing in ideas that they have seen on Pinterest or other social media sites, she said.

Most people want a look that “really pops” so they choose to have accent nails on their hands or feet. “You do one or two nails with the design, not all of them,” DeChiazza said.

The accent look can range from “a few dots on a nail or a whole design,” she said. DeChiazza creates her own designs, inspired by artwork or from patterns on clothing.

The artist’s own digits display a variety of looks, including a pineapple painted on one nail, a series of dots on another, a sequined line on a third nail and a glittering gold thumbnail. She has several sample designs ready for clients to view when seeking a new look.

During prom season, a popular fashion is to have accent nails that pick up the patterns on the young woman’s evening dress. “If there are sequins on the dress, they want their nails to be sequined as well,” she said.

“Prom seems to be a big time for nail art,” the designer observed.

Brides, meanwhile, opt for more classic nail art and basic styles such as French manicures. On the trendier side, DeChiazza did create “I do” nail art for one couple.

Wild, bright designs are popular choices for holiday makers, with art on toenails more prevalent for folks who plan to have their feet exposed on the beach. “People tend to get the craziest when they go on vacation,” she said.

Explaining why people seek nail art, she commented, “It’s a unique way to jazz up your look — it’s nothing permanent like hair color.”

As for the most unusual request, DeChiazza said, “During Christmas, someone asked for a nativity scene complete with Mary, Joseph and the baby Jesus. That was probably the most difficult, but it turned out great.”

Amazingly, the nail artist was able to paint the entire scene on one fingernail. “The shelter was on one nail, and they (the holy family) were underneath it,” the technician recalled, adding, “I was a little intimidated when she asked me to do it, but it worked out.”

For this “investigative” piece, this reporter chose DeChiazza’s design that resembles an impressionistic soft watercolor painting for the accent nails, with pale pink color for the other eight fingernails. “Most people have their ring finger as the accent finger,” the nail artist explained, so I took her recommendation for my new style.

DeChiazza creates the design for the accent nails at the same time as she paints the other nails. Selecting the colors needed for the design, the nail artist places a dab of each color on a card to create a palette from which to work.

“About two weeks is typical. Some clients get four weeks out of it,” DeChiazza said regarding how long the nail color remains attractive.

As a result, most people want gel polish rather than traditional nail polish. She said it is rare now for a customer to choose regular polish.

With a lifelong interest in art, DeChiazza took all the art classes offered at Wheeling Park High School and continued studying art at West Liberty University. She worked at Frederick’s Day Spa Salon as a receptionist while attending college.

She found the salon setting to be so exciting and fun that “I just had to be part of it.” She then attended Penn Commercial Business/ Technical School for training as a nail technician.

DeChiazza, who has been working as a nail artist for over two years, also enjoys exploring other forms of art. “I still do some painting. Sometimes a nail just isn’t big enough,” she remarked. 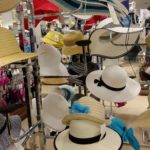 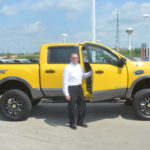 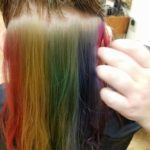 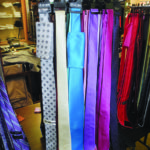 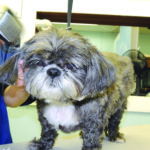 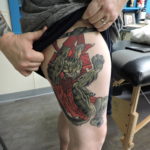