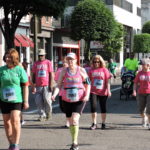 Many baby boomers are among the throngs of walkers and runners participating in the Ogden 5K event and other area road races. Appropriate gear and sensible training are necessary for baby boomers who want to launch a running regimen. Photo by Jennifer Compston-Strough

Proper preparation — with appropriate gear and sensible training — is necessary for baby boomers who want to begin running.

While baby boomers may have a bad reputation for wanting immediate gratification and doing things under their own terms, fitness professionals caution them to take it slowly and methodically when starting a running regimen.

Joe Slavik, director at the Howard Long Wellness Center of Wheeling Hospital, said, “You don’t want to discourage people from that activity. There is some research those able to jog in that age group tend to stay more fit than those that don’t. There are some health benefits. But a lot of those (who do better) have been lifetime joggers.”

He cautions newcomers on “making sure that the volume of the jogging that you’re doing is not very high.” He explained that orthopedic issues and problems with knee joints and hips can stem from repetitive movement.

Slavik said older adults “need to get to a certain level of fitness before even thinking of starting a jogging routine.” Optimal fitness is important so that the stress of exercise is a “positive” stress, he said.

They also should run on nonconsecutive days to have time to rest sore muscles. If runners “go too hard, too fast,” the painful result can be shin splints, nagging repetitive exercise injuries, strains, sprains and injured knee joints, he warned.

Newcomers also should not be aiming for speed or winning races in their early outings. Slavik cautioned that the risk of potential injury increases with harder running.

Instead, Slavik recommends that people begin a whole body fitness effort with a gradual walk-jog program to reduce the risk of injuries. Proper technique also is vital to keep stress to a minimum.

“You really have to achieve a certain level of fitness before you start,” Slavik said. “If they don’t, they’re going to fail.”

With proper preparation and technique, older adults can build running into their lifestyle as a lifelong pursuit. “Baby boomers can continue jogging, (but) they have to be really conscious of the volume and amount and speed,” he said.

Slavik said, “If someone has cartilage issues with their knees or had some significant orthopedic injuries, jogging is certainly not the exercise we would recommend to them.”

George S. Frazier, manager of CentreTown Fitness in Wheeling, said people, age 45 or older, should have a physical before launching a running program. “Let their GP (general practitioner) look at them to make sure don’t have any issues underlying with their heart or orthopedically, to get started in a healthy way,” he said.

Frazier and Jana Shubat, who also works at Centre Town, said beginners need to acquire the right equipment. For example, improper footwear — ill-fitting, cheap shoes — can cause injuries and contribute to orthopedic problems.

“Don’t spare the expense of a good, quality running shoe,” Frazier said. He also suggested that people consult an exercise physiologist, physical therapist or orthopedic specialist to figure out what type of foot motion they have.

Shoes should be properly fitted in size and accommodate the wearer’s particular gait. “Go to a professional running shoe store where people who know what they are doing can fit you,” Shubat said.

“Go with a better shoe. Proper socks are important to wear. Today the technology is there to make really comfortable, dry-fit, cushioned socks,” Frazier said. “Get proper clothing. Most of the clothing they make for running today is dry-fit. It dries fast and pulls moisture away from the body. Getting some good comfortable attire to wear is important even before the process of training.”

As for training, he said, “I recommend they might start off by just doing some walking, then eventually move into brisk walking.”

Frazier suggested that beginners stay on level ground and use walking trails in well-lit areas that are frequented by more people.

“They might do some walking-jogging to build up their condition level until they can actually warm up and then jog,” he said. Initially, a novice should spend no more than 15-20 minutes in this exercise.

Warm-up is essential, involving movement stretching, hip swings, arm swings and torso rotations, to get the body loose, he said. At the end of a workout, static stretching is important to protect the lower back and calf muscles.

As people age, “our muscles aren’t as flexible as they were,” Frazier said. “Good stretching will pay huge dividends in the long run … Injuries have more to do with lack of flexibility.”

He recommends that boomers “be satisfied with a little bit of activity at the beginning. They can increase distance and time, but time they spend is probably more important than how fast.”

At 62, Frazier said, “The quality of time I put in is more important than how hard I do it.”

Shubat observed, “One of the biggest mistakes people make is they want to start running and go as hard as they can.” Shubat, who has conducted “learn to run” clinics, said, “You need a plan of some sort … Most of us have to learn to run-walk. Start by warming up to a walk, (with) 30 seconds of running, 30 seconds of walking. You go into a run-walk. You take your time … It’s the safest way to prevent injuries and also you build endurance.”

Apps found on smartphones or downloaded online can be useful and can be to modified to suit individual needs. For instance, an app called Couch to 5K is “really a great program,” she said, adding, “I think those apps are very good, but they’re not for everyone. It’s not written in stone. It’s a guideline.”

Shubat suggested that novices set a goal. “We have a lot of local races. I suggest sign up for a race, eight to 12 weeks away, and you have that goal in mind. Now you’re going to practice and get ready.

“The first race, it doesn’t matter how fast you do. Many people do a walk-run. It’s good to have a little goal there. It gets you out in the community. You might find someone to run with. It’s kind of a social thing, too,” she said.

Regarding other factors to consider, Shubat said, “This time of year, you need to look at the elements, too. Right now, there is a lot of humidity. It’s hard on us seasoned runners. You have to be very careful with the elements. You have to slow it down when it’s hot. Take in some water before, during and after.

“Your body is trying to cool itself down. You’re heating it up. You add the exercise to it, you have that added issue,” she explained. “If you’re walking or running up a hill or grade, you can have more and more problems.”

Different precautions are necessary at other times of year. “In the winter, you have to be careful with the ice on the ground. Don’t try to jog and run into a patch of black ice,” Shubat said. “The elements are something you have to think about.”

She also urges people to be cautious with headphones. “You want to be able to hear a car coming, a bad person coming upon you, a dog. Mostly, I don’t use them. If I do use them, I do keep one earbud out,” she said.

July Boomers and Beyond 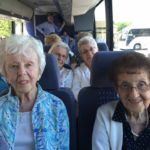 Question: I am receiving Social Security retirement benefits and I recently went back to work. Do I have to pay ...

STEADY U Ohio, an initiative of the Ohio Department of Aging, urges families to take this time to learn more about ...

It’s Not Too Late to Protect Your Assets

The question that we as elder law attorneys hear most often is “Is it too late to protect our assets?” We are ...

Stick With This Arthritis Treatment

Dear Savvy Senior, Is acupuncture a proven treatment for arthritis pain? I have a lot of back and neck pain and ...