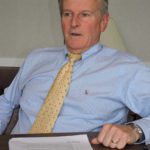 WHEELING –Thad P. Obecny said during his decades of work in the financial sector, the only time he can remember such drastic changes to the federal tax code came more than 30 years ago during former President Ronald Reagan’s administration.

“It is just really massive. These are easily the biggest changes in at least 30 years,” said Obecny, who serves as principal of Perry & Associates in downtown Wheeling.

Indeed, the passage and signing of the Tax Cuts and Jobs Act late last year was only the beginning, Obecny said. In fact, now the Internal Revenue Service must interpret what the new law actually means and determine how to enforce it.

Obecny said most of the changes will be effective for the 2018 tax year, which means taxpayers should not notice much change on the returns they file in the next few months.

“As a whole, most taxpayers should save anywhere from $1,000 to $2,000. Some will see much more, and some much less,” he said in trying to simplify the extremely complicated matter as much as possible.

Obecny said historically, most of his clients choose to take the standard deduction. He expects this to increase because of changes for those who previously chose itemized deductions.

“The most you can deduct for state and local taxes now is $10,000. Previously, it was unlimited,” he said.

Although the standard deduction nearly doubles, some of the impact will be offset because the personal exemption of $4,050 will be eliminated.

“This all totally depends on someone’s individual situation,” Obecny stressed. “For example, a person who doesn’t make much money but has three kids is going to get $3,000 more than they did before.”

Obecny said anyone getting divorced after Jan. 1, 2019 should know that alimony payments will not be tax deductible after that time. Also, the spouse receiving alimony will not have to pay tax on it.

For businesses, the corporate tax rate drops from 35 percent to 21 percent. However, some businesses expenses that previously were deductible will be no longer, he said.

“They took away the entertainment deduction,” he said. “For example, you used to be able to deduct 50 percent of your expenses for taking a client to a football game.

Obecny said the estate tax, which some referred to as the “death tax,” will not be as burdensome now because the exemption will go from $5.6 million to $11 million.

“I would really recommend consulting a professional, especially if you have a lot of income. The time to plan for the changes is now,” he added.

Sooner Is Better in Planning for Retirement

It’s Never Too Early to Save for Higher Education

By SHELLEY HANSON Staff Writer MARTINS FERRY — When it comes to saving money for college or other higher ...

When to Use Credit And Debit Cards

The decision of whether to use a debit card or a credit card can affect consumers’ credit ratings and make it ...

In the digital era, many errands that once required leaving the house can be conducted from the comforts of home. ...

Real estate can be a good investment that helps build wealth and secure a financial future. According to ...

Traits of a Good Financial Adviser

When looking for help, consider these tips to get the best Professional financial advice can be a valuable asset ...