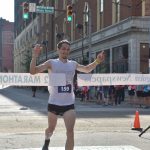 Photo by John McCabe Bryan Morseman, of Bath, N.Y., wins the 43rd annual Ogden Newspapers Half Marathon Classic in a time of 1:15:00.30. It is the second straight victory for Morseman.

WHEELING — Bryan Morseman was sick all week and wasn’t sure he would be able to compete in the Ogden Newspapers Half Marathon Classic.

He still didn’t feel great on Saturday morning and spent most the race in third place. But for a guy that is used to winning, he wasn’t going to let a little thing like an illness hold him back.

Morseman finished the 43rd annual race in a time of 1:15:00.30 to claim first place, crossing the tape in first place for the second year in a row.

“I wanted to come back and defend my title, and that is always motivation, no matter how you feel.”

Morseman, from Bath, N.Y., is used to traveling more than 10 hours to race, so he said the five-hour trip to Wheeling feels like nothing.

Add in wanting to win the grueling race for the second year in a row, and Morseman was determined to not let his sickness get in the way.

Despite trailing at the beginning, he never lost focus and knew a victory was well in his reach.

“I was in third, but they were never very far ahead of me,” the 33-year-old said. “They might have been 15 seconds, so it wasn’t like they were pulling away. I just wasn’t feeling good. But I basically said ‘screw it.’ I know the course, I pretty much knew the last mile is all downhill. I know that I can try to get going there and if anyone was close I would try to beat them there.”

Going into the race, Morseman said he didn’t have a strategy but knew where he could make his mark.

“I used to be a hill runner, but those guys were really taking at it in the hills,” he said.

“The downhill I seem to be fine at. I drew more into killing the downhills instead of taking the uphills too hard.”

“No doubt (I’m pleased with the time),” he said. “Last year I wasn’t sick, and the heat definitely doesn’t help the sickness. It has been difficult the whole spring. I don’t know if was allergies or the little ones being back in school. But every week seems to be something. I have been losing my voice a lot, and funny thing is I’ve won all three races when I’ve started to lose my voice. It doesn’t seem to slow me down.”

After all, he is running for the best reason of all — his children.

His young son, Leeim, 4, battles spina bifida and Morseman uses the winnings from his races to help pay for medical bills.

“Having my family here, that is the key,” Morseman said. “I am used to running marathons. Last week I won a marathon at the Poconos. When you get to run a shorter race, it feels good, and I get to them faster.

Will Morseman be back to go for No. 3?

“As a defending champion, you have to,” he said with a smile. “As long as my leg isn’t broke, I will be back.” 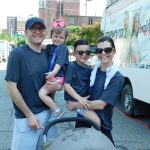 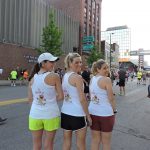 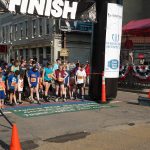 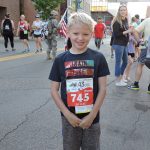 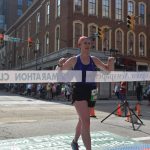 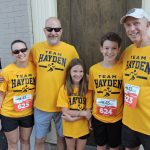