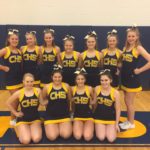 Cameron cheerleading coach Bethany Scott has been an assistant head coach for five years and is now in her second year at the helm of the Dragons. She has two volunteer coaches who are both very close to her.

Her mother, Missy Ross, and her daughter, Maddie Ross, are both along for the ride with Scott and she couldn’t be happier to have them.

“Maddie and Missy both did the dancing,” Scott said. “They run the Arielettes dance studio on 88, while Morgan Miller is my main assistant and she did the cheer. It was a team effort for all of us.”

All of the Cameron coaches are choreographers, so the routine for the OVAC Championship should be put together very well.

“Its a fast tempo with a lot of tumbling,” Scott said. “There are a lot of short, small dances instead of one long big one.”

Four years ago, the Dragons placed fourth in the OVAC competition for their highest place in school history.

“We have a pretty new squad this year,” Scott said.

“We have a lot of new girls and had a lot of girls that played basketball and decided not to come out this year. We are a new squad going to the OVACs and if we can get through a clean routine, then I’ll be pretty happy.”

“I have a good time with all of my girls. They are a fun group of girls and we have fun but they also work really hard.”