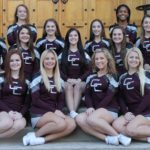 Wheeling Central has been very successful in its cheering program, especially as of late.

The Maroon Knights have won 16 OVAC cheering championships in their school’s history and are coming off of a 2016 season in which they garnered state runner-up honors after claiming the Region 1-A title and claiming first place at the George Washington High School cheer competition.

Leading the Knights to such a successful run has been head coach Jessica Becker, who is in her 13th season as a head coach in the OVAC and her 11th at the helm of Wheeling Central.

Becker was named the WVSSAC Cheer Coach of the Year in 2014 and with the help of assistant coach Corey Pietranton, the Knights are eyeing a 17th OVAC championship.

Pietranton is in her 17th year at Wheeling Central.

“We were blessed with much success in 2016,” Becker said. “We are looking forward to ending our competition season strong at WesBanco Arena on Feb. 4.”

A 13-girl squad will have 11 competitors in the OVAC competition with senior captains Cassidy Sansone and Bailey Wear paving the way for the Knights.

Other seniors who will embark on an OVAC title are Mattie Hayes and Hannah Mozingo, with lone junior Carly Pajak, and the only sophomore being Kaylee Miller, while a strong freshman class of seven, includes Lane Bibey, Maddie Dobson, Meliyah Gayton, Aubrey Gossett, Elizabeth Howard, Leah Weimer and Jordan Caldwell, who is an alternate.

“This year’s team is a very special group of girls,” Becker said. “They are led by four incredible seniors. It has been a pleasure to watch them take our eight underclassmen under their wing and teach them the ‘Wheeling Central Way.’

“The team has really bonded from the start and I truly believe that has been the root of our success this season.”

The Maroon Knights’ routine has been choreographed by Josh Wolfe, who has put together an exciting dance.