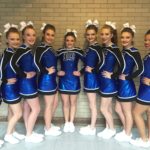 Harrison Central is led by first-year coach Sunnie Ruble but she has already led the Huskies cheering squad to recent success.

The Huskies claimed second place in the small varsity non-mount division at Shaker Heights, along with claiming the Terrific Tumbling Award.

In the offseason, Ruble finds the time to travel to work with other high school teams on aspects such as motion technique, stunts and jumps and after getting her first year as a head cheerleading coach under her belt, she is only learning more that she will be able to teach to younger and upcoming cheerleaders.

As for her own team, the Huskies are made up of nine girls that include seniors Bailie Ray and Cierra Frye; juniors Kali Carter and Reanne Brooks; sophomores Alivia Frye and Sara Bethel; and freshmen Kaylee Elliott, Kenna Mizer and Sage Brown.

“They’re a great group of athletes,” Ruble said. “They are able to think realistically, come into practice with an open mind and get things done.”

As the crowd watches the Huskies inside of WesBanco Arena on Saturday, Feb. 4, it will realize just how hard the team has been working on perfecting its routine.

“This year’s OVAC routine has a lot of movement with clear transitions and sharp, clean motions,” Ruble said.

“The work ethic that all of these girls have is truly remarkable. Rarely does anyone complain about doing it full out for the fifth time, conditioning or if they owe me laps.

“They just know it will make them better so they don’t argue it.”