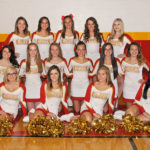 The last few years have been challenging for Indian Creek cheerleading at the OVAC competition.

They have participated at both the 4-A and 5-A levels, which makes it difficult to adjust to certain opponents.

“We have been up and down,” Redskins coach Gina Giuliani said. “We fluctuate between 4-A and 5-A and it is never the same competition.”

This year, Indian Creek will be joining the 5-A division, after taking part in the 4-A events last year.

With the competition being so hard to prepare for, Giuliani has a unique mindset heading into the OVAC Championship.

“We are very optimistic,” Giuliani said. “Our mindset is that we are just competing against ourselves because the competition has been inconsistant. We just need to focus on ourselves.

“Its been hard since there are different expectations from Ohio but we will challenge ourselves.”

Assisting Giuliani in her fifth year as the varsity coach is Lisa Sithen, while Shane Sanders does the choreography for the Redskins.

“Our routine is exciting,” Giuliani said. “Its something new and different than our usual routine.”

There is another challenge for the Redskins this year, along with the rest of the OVAC. New music. There are no copyrighted songs allowed, which could make it much more difficult for teams to decide on music.

“It has been a challenge with the music,” Giuliani said. “I tried to get it early since I had enough time so they have been practicing the routine all season.”

“I have been saying this for a couple of years now but it is true,” Giuliani said. “We have 11 juniors and it is interesting having that many girls in one class.

“They are all great and they show up to work at practice.”