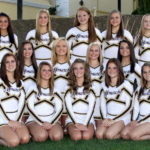 John Marshall cheering coach Marcie Robbins is in her 11th season at the school and her eighth as the head coach of the Monarchs.

Robbins and the Monarchs are coming off a stellar third-place finish at the OVAC Cheering Championships in 2016, along with a fifth-place result at regionals.

Both were great accomplishments but the Monarchs are hoping to achieve even higher goals for the upcoming OVAC Championships at WesBanco Arena on Saturday, Feb. 4.

“This team is special because of their determination,” Robbins said. “They’ve worked really hard to get ready for OVACs. It has taken a lot of conditioning to help them have the endurance to do this routine and it has definitely paid off.”

The Monarchs haven’t even needed a choreographer for the past two seasons, as Robbins has put together the routines both years for her squad and she is looking forward to watching her team perform in front of a packed house at WesBanco Arena.

“This year’s routine is packed with a lot of tumbling and the dances are really fun to watch,” Robbins said. “I’ve had a lot of fun watching this routine come together and I am very excited to watch these girls show everyone what they’re made of at OVACs.”

The Monarchs will soon get their chance to prove to everyone that they are even better than they were a season ago.

Helping alongside of Robbins are assistant coaches Kelly Simms and Dee Wills.