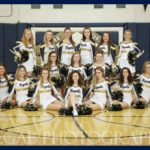 Magnolia head coach Jacque Clegg might be in her first year with the program but she is assisted by veteran Marcie Cline, who has been a proud Blue Eagle for 10 seasons now and together, the Magnolia cheer team is in good hands.

Clegg has been coaching cheerleading for the last six years in Virginia so she has had plenty of experience and she proved that by coaching the Blue Eagles to a third-place finish in the regionals this year.

“We were definitely excited to go from where we were last year to a third-place finish this year,” Clegg said. “It just really makes me proud with the progress they have made since last year. We have a wonderful group of kids and I just can’t say enough about them.”

Choreographer Joey Takacs has also been heavily involved with the progress that the Blue Eagles have made in the last year and will have them prepared for OVACs on Feb. 4 at WesBanco Arena.

“We want a routine with energy and creativity that will engage the crowd and the judges,” Clegg said. “We are a determined group. We know we are up against good schools but our kids will do their homework and they have been practicing with energy.

“We have a tight knit group of girls who are motivated. They will stay and continue to work after practice, they are goal-oriented and they even act like a team when they aren’t cheering. When somebody gets down, they are always there to bring them back up. They are very skilled athletes who work extremely hard.”

Magnolia has never won OVACs and Clegg, Cline and her squad are excited for the opportunity to change the history of Magnolia cheering.

“We have never won the OVAC championship before,” Clegg said. “But we all have the same goal to change that. We have 17 amazing kids on this team and its like having 17 kids of my own and they each bring something special to the table.”