The Shadyside Tigers are coming off a superb OVAC competition last season as the runner-ups of the AA division and veteran head coach Melanie Haswell, who has coached cheering for 28 years, is excited to compete this year with a promising routine on Feb. 4 at WesBanco Arena in front of what should be a packed house.

“Our cheerleaders have worked very hard this season in hopes of a positive outcome in the upcoming OVAC competition,” Haswell said. “We feel that this OVAC routine has the difficulty and showmanship to be, once again, a competitive routine.”

The Tigers’ routine is choreographed by Megan Caruso.

Shadyside has placed in a number of Cheer For A Cure events in the last four years, while advancing to the state championships in the last two seasons where they have placed in the top four both years.

“This is a great bunch of girls,” Haswell said. “They are hard working, dedicated and resilient. They have never given up and they always strive to be the best.”

“It is a long season,” Haswell said. “They start in June and continue through March. You have to be fully dedicated and truly love cheering and I would like to thank my 13 girls for making this such a memorable, relaxing and entertaining season.

“I would also like to wish my four seniors the best of luck in their future after graduation.” 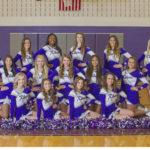