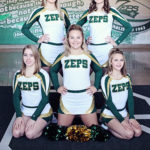 Not only will the Shenandoah Zeps be taking part in the OVAC Cheering Championship at WesBanco Arena on Feb. 4, but they will also be making the trip to the International Competition at Disney in March, after winning a bid.

With such an important trip ahead for the Zeps, that changes their outlook a little bit on the OVAC championships.

“Our goal for the OVAC competition is to stay healthy,” Zeps coach April Giesey said. “That way we can compete at the International Competition at Disney in March.”

Giesey is in her second year as the Shenandoah head coach, after spending the two years prior as the junior high coach.

Shenandoah’s choreographer is Erika McDaniel of the Ohio Valley All Stars in Parkersburg, W.Va.

McDaniel has put together a routine that has the Zeps and their coaching staff excited and working around the clock to prepare for.

“Our OVAC routine has a nice cheer and dance segment,” Giesey said. “These girls have been working extremely hard, and they never quit.”