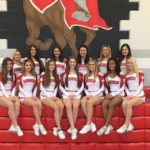 Not only has Toronto had success at the AA level as it comes off an OVAC championship victory a season ago, but it also claimed four titles in the single A dating back to 2008.

First-year head coach Jenna Rampello was a part of that success as she graduated in 2011 from Toronto. In fact, she won an OVAC Championship in all four years that she was in high school.

Her head coach might have had something to do with that.

Joey Takacs, who is now her assistant coach and choreographer, coached Rampello in high school and now the duo is back together again.

“I was coached by my assistant, Joey,” Rampello said. “You could say that we are a dynamic duo coaching our girls this year.”

Takacs is also the choreographer for many other teams taking part in the OVAC Championship.

Takacs is brilliant when it comes to putting together routines, and you can bet he worked his magic for his Red Knights.

“Our routine this year is very eye catching,” Rampello said. “We have a lot of different choreography Takacs put into this routine.”Our music is different as well. We went with a different music producer and he made the mix about the team. We are very satisfied and excited to showcase this routine that is very flashy and exciting to watch.”

“We tell our girls no matter what happens, as long as you go on that floor and give it everything you got and you leave that floor with no regrets, then that’s the only thing we can ask for,” the head coach said. “If they go out there and sell that routine like we know they can, then they are already winners to us.”