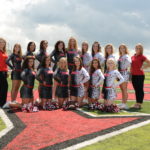 Weir has earned runner-up honors at OVACs for the past two seasons, along with a second-place finish at the regional tournament and will attempt a run at another successful showing behind first-year coach Nicolette Hill.

Hill has already started to take off from where the Red Riders were a season ago as they placed first this year at the regional tournament, an improvement from last year’s result.

Claiming the top spot at regionals was the first time Weir had accomplished the feat since 2009.

Now, after the early success for Hill at the helm, she will focus her attention on the OVAC cheering competition.

Joey Takacs is the choreographer for the Red Riders and has found a routine that Hill is looking forward to seeing on Feb. 4 at WesBanco Arena.

“We started fresh,” Hill said. “Our girls are very talented tumblers. We are strong in standing and running tumbling.

“Every girl on the team has been enrolled in dance school since they were little and I am excited to see them dance and incorporate more of that into our routine.”

This year’s Riders team has plenty of personality but also knows when it is time to get to work.

“They are such a fun group of girls to be around,” Hill said of her squad. “They are very talented but they also work very hard. They are always striving to achieve more.

“They have all been together since they were little, they are always hanging out and they are just a very close knit group.”