Many Restaurants Still Open For Take-Out During Outbreak 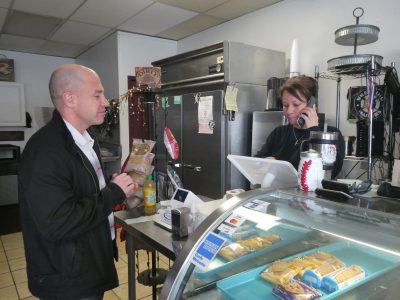 WHEELING — Local eat-in restaurants are adjusting to the ins and outs of being take-out only businesses.

Public dining areas in both Ohio and West Virginia have been ordered close by respective state officials amid coronavirus scares, but still they are trying to make a go of it by offering take-out and even curbside pick-up services.

Most are reporting slow or mediocre business, and they wonder if they will be able to survive for the long-term.

T.J. Radevski, owner of T.J.’s Sports Garden in Wheeling, said he is operating with just he and his wife working, along with two cooks and one employee taking orders by phone.

The restaurant continues to offer its full menu for take-out and delivery from 11 a.m. until about 8 p.m. each night. Radevski is serving as his own “car hop,” taking out orders to vehicles parked outside.

“(Wednesday) was our first experience, and business can always improve,” he said. “It was not the greatest. I am hopeful it will pick up in two to three days. We still have the same service and great food. You just have to order it as carry out.”

Radevski said he does support the decision of state officials to close restaurants during the pandemic.

“As a nation, we are the strongest in the world,” he said. “We will kick it in the butt.”

In Bellaire, Gullas Restaurant began doing take-out only orders on Monday between the hours of 10 a.m. and 8 p.m.

“(The coronavirus crisis) is definitely taking its toll.”

Gulla said he was forced to lay off some of his younger employees. Typically he employs about 14 employees, but is presently just working six of them.

“This is our 91st year in business,” he said. “We started in 1929, just one month before depression…. If this goes on a couple months, I don’t know if we can hold up. Are they going to shut us down completely in a week? Who knows?”

Angel Lamotte, owner of the Hall of Fame Cafe in Wheeling, said she has a regular customer base that supports the restaurant.

“It has not been too bad,” she said. “I’m a little worried today, but it will be fine.

“I just don’t know what to think right now.”

Lamotte said the Hall of Fame has lost all its catering jobs as upcoming events are being canceled.

“That’s what kills us — right up until the end of April,” she said.

“You try to be prepared, but you can’t be prepared for everything,” he said.

He said he has about 30 employees, whom he is working sporadically over the coming days.

“I’ve had to tell some people to stay home, and some to go to the unemployment office. We’re not seeing a whole lot of support yet, and we’re just trying to keep people employed.

“We’re pulling people in as needed and running a skeleton crew. We just don’t have the income to support the overhead.”

Haddad said the restaurant has paid over the years for an insurance policy they believed would cover them and continue to pay their employees in the event of a closure.

“But now our agent is telling us it would exclude viral pandemics, and the only one who can change that is the West Virginia State Insurance commission.

“We paid for this insurance thinking it would provide for a lot of things. It would allow us to pay our employees. That it won’t indemnify is borderline criminal.”

Curbside service was being provided Thursday to those ordering packaged “heat and eat” dinners at the Public Market in Wheeling, and grocery items also could be purchased.

Manager Jodi Adams said a produce shipment received Monday only contained half the items ordered, and there had been concerns there might be a shortage of produce items going forward.

She has learned though, some local farms that supplied to college campuses have now lost those orders as schools close, and that produce will be made available.

“We have been getting calls from elderly and pregnant women asking us to shop for them, and they would come pick it up,” Adams said. “Business has been steady, but people are very tense.”

Mehlman’s Cafeteria in St. Clairsville remains open for take out orders, but has reduced their menu to just three entrees each day and an offering sides.

On Thursday, customers could choose between roast beef, turkey and dressing and pork chops, and receive red skinned potatoes, green beans, tossed salad and a roll for $10 or $11.

“Business is going well,” said manager Natasha Loewen. “We will change items day by day, and offer a little variety for everyone. We definitely couldn’t do all our menu.”

Mehlman’s requires all orders be pre-paid over the phone, and an employee brings meals ordered to the customer’s car.

“We’re asking people don’t get out of their vehicles,” she said.

Toni DiCarlo, owner of downtown DiCarlo’s Pizza, said the iconic eateries was “not as busy as we normally are.”

“But we are still are selling pizza,” she said. “We’re selling in Wheeling and Glen Dale. All you have to do is call in and pick-up.”

DiCarlo hopes to soon be on board with the Door Dash delivery service next week. She employs 15 workers between the two locations.

“We do still have all our employees working,” she said. “Prior to this happening, I was looking for more help. I can hold off on hiring now to make sure current employees get enough hours.”

The Vagabond Kitchen in Wheeling began offering curb-side service this week before dining areas in West Virginia were closed. Hours have been shortened to 11 a.m. to 8 p.m. on weekdays and Saturdays, and from 10 a.m. until 3 p.m. on Sundays.

“The response is fair to middling,” owner Matt Welsch said. “It was nice yesterday, but it is today slower. I expect it to pick up over the weekend.

“I will play it by ear. I know how much we need to make each day to keep from shutting down. If we drop below that, we will have to shut down.”