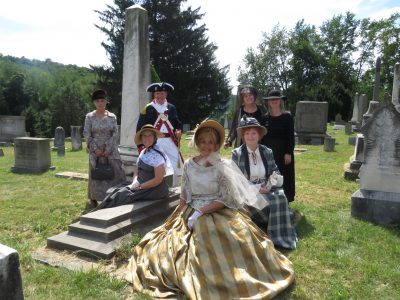 WHEELING — One of the area’s oldest burial grounds will be open to visitors when a free tour of Stone Church Cemetery is offered from 1-5 p.m. next Sunday, Sept. 22.

Friends of Wheeling, a local historic preservation group, is presenting the tour as a special Wheeling 250 program. The event is sponsored by a grant from Wheeling Heritage. Wheeling 250 is a year-long observance of the 250th anniversary of the community’s founding.

The cemetery is located along Stone Church Road in Elm Grove. Because parking is extremely limited at the cemetery, Friends of Wheeling organizers have arranged a shuttle service for the afternoon.

Parking for tour-goers will be available at Elm Grove United Methodist Church, 125 Kruger St., and St. Mark Evangelical Lutheran Church, 141 Kruger St. Limousines will be stationed at both sites to provide shuttle service between the parking lots and the cemetery.

During the walking tour, Friends of Wheeling members and others will portray prominent figures interred in the cemetery.

Stone Church Cemetery is the final resting place of many prominent figures in the history of Wheeling, including 19 Revolutionary War patriots. A couple of the patriots’ grave markers have not been located.

The Sons of the American Revolution’s Fort Henry chapter in Wheeling will mark the patriots’ graves with Betsy Ross-style flags for the tour.

The SAR’s Ebenezer Zane chapter in St. Clairsville has placed modern markers to preserve the patriots’ graves. Gary W. Timmons, who is a member of all three local SAR chapters, has researched these patriots’ service records and personal histories.

Among the patriots are two Revolutionary War colonels (David Shepherd and Moses C. Chapline) and two patriots who rose to the rank of colonel in the War of 1812 (Moses Shepherd and Archibald Woods).

The cemetery, now owned by the city of Wheeling, remains an active burial place.

Until 1970, Stone Presbyterian Church was located adjacent to the graveyard. The church building, however, was torn down to make way for Interstate 70. A new structure was built several blocks west, on East Cove Avenue, where the congregation continues to worship.

He joined the Confederate Shriver Grays when he was 17 and later served with a Confederate cavalry unit. After the Civil War, he studied medicine and practiced in Triadelphia and Elm Grove. He served as physician to the county infirmary and for the Home of the Aged at Altenheim and was chief surgeon of the West Virginia division, United Confederate Veterans. He practiced medicine until well into his 70s.

She was the wife of Wheeling physician and banker Dr. John L. Dickey, who was a grandson of Mary and James Vance. The couple became active members of Vance Memorial Presbyterian Church.

He became the first minister of any denomination to hold regular religious services in Wheeling, beginning at Forks of Wheeling Church, later known as Stone Church, and in town at what became First Presbyterian Church. In keeping with church doctrine against the use of alcohol, he organized the first “barn raising” west of the Alleghenies that was accomplished without the use of whiskey.

Her father, Alonzo Loring, bought the Shepherd Mansion (Monument Place) from Lydia Shepherd Cruger’s estate. He left the property to Lucy and her husband, coal merchant Charles Milton. The Miltons reared three children in the home. In 1907, they did a major remodeling and added several rooms to the original building. After her death, the Osiris Shrine purchased the property. She was a great-granddaughter of Moses Caton Chapline, who served with great distinction in the Revolutionary War and later was mayor of the town of Wheeling.

He was one of the first settlers in Ohio County, having purchased land from Silas Zane in 1773 and receiving a land grant the following year. He and his family built a fort in Elm Grove and a grist mill. He served as justice of the peace for West Augusta District and later as county lieutenant when Ohio County was formed. In 1777, he was promoted to colonel in the Virginia militia and assumed command of Fort Henry. He was commander during the first siege on the fort. He donated land for Forks of Wheeling Presbyterian Church and a burying ground, now Stone Church Cemetery.

He worked with Moses Shepherd to build the National Road, constructing bridges, cording stone and building parapet walls. He owned a great deal of property, including most of the land where Wheeling University now stands and Mount de Chantal Visitation Academy once stood. His Steenrod Avenue home, Woodridge, built in 1831, still stands and is on the National Register of Historic Places. He and his son, Lewis, both voted in favor of Virginia’s secession from the Union when the Civil War was looming and thus were labeled as “traitors.”

He was admitted to the bar in1826, first practicing in St. Clairsville and then in Wheeling. President Polk appointed him as the U.S. attorney for the western district of Virginia. He was elected to Congress in 1851. After a year in Congress, he was elected judge of the Circuit Court of Virginia. He disagreed with the actions of those seeking to set up the present state of West Virginia and refused to take an oath of office to support those efforts. As a result, he was removed from his judgeship position and was sent for a time to the Union prison camp in Columbus.

She was the daughter of early settlers in Wheeling. She and her husband, James Vance, settled on a farm located at the intersection of National Road and Bethany Pike. Their son, James Nelson Vance, honored them with the donation to build Vance Memorial Presbyterian Church on the site of the family home.

She was buried in Greenwood Cemetery, but other members of her family rest in Stone Church Cemetery. Her husband John was a son of Archibald Woods, one of three brothers who were among the area’s first settlers. The family homestead was located in an orchard at the head of what is now named Homestead Avenue. In the 1890s and early 1900s, her son, George Woods, divided the surrounding farmland into building lots. Some of those lots are now known as Woodsdale.