School of Dance to Perform ‘Alice in Wonderland’ 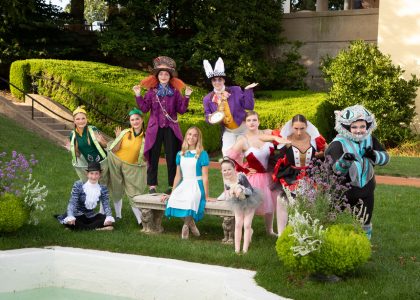 WHEELING — The story of “Alice in Wonderland” was penned more than 150 years ago, yet this engaging fantasy of a young girl and her adventures into a world of enchantment has remained popular with young and old alike.

Oglebay Institute’s Youth Ballet Company creatively brings this timeless classic to life through the art of dance. Six performances will take place: at 7 p.m. Oct. 12 and 19; at 3 and 7 p.m. Oct. 13 and 20 at Towngate Theater, 2118 Market St. in Wheeling.

In addition to the show, children can also enjoy a Mad Hatter tea party with the cast of “Alice in Wonderland” prior to the matinee shows Oct. 13 and 20.

With friends, villains and life lessons along the way, the show is a contemporary production featuring dozens of beautifully costumed dancers and captivating dances of original choreography. The production is part of Oglebay Institute’s children’s theater season, which brings classic stories from the page to the Towngate Theater stage.

“Almost everyone is familiar with the story of ‘Alice in Wonderland’ and the characters, but many have never seen the ballet, which is a wonderful experience for the whole family,” Oglebay Institute Director of Dance Cheryl Pompeo said. “The production will unleash childhood memories for adults and children will enjoy the fabulous costumes and dancing along with the magic and mystery of the story.”

Like so many fairy tales, “Alice in Wonderland” has evolved during its journey from oral tradition to the page to the stage and screen.

Written in 1865 by English author Charles Lutwidge Dodgson, better known under the pseudonym Lewis Carroll, “Alice in Wonderland” has been represented by many art forms including movies, cartoons, television, ballet, musical theater and fine art.

Dodgson (Carroll) was a mathematician and a logician, who was a lecturer at Oxford for some 26 years. He was also an accomplished photographer and a church deacon. He originally wrote the tale for a 10-year-old girl named Alice Liddell, the child of a church colleague.

The famous book developed as he narrated adventures to Alice and her siblings, making up the entire story as he went along.

Alice and her sisters were so enchanted with the tale that she later pleaded with Dodgson to commit the story to paper, which he did along with sketches that he personally illustrated. He presented the manuscript to Alice as a Christmas gift. Dodgson’s friends soon urged him to publish it. He revised and expanded the story to almost twice its original length and published his whimsical tale under the pen name Lewis Carroll.

“Alice in Wonderland” is the first performance planned by the student dance company for 2019-2020. OI’s Youth Ballet Company will also present other dance shows this season including “The Nutcracker” to be performed during the holidays at both the Mansion Museum and Towngate Theatre.

To purchase tickets for “Alice in Wonderland” and for the tea party with the cast, visit OIonline.com or call 304-242-7700. Some tickets may be available at the door, but many shows will sell out.