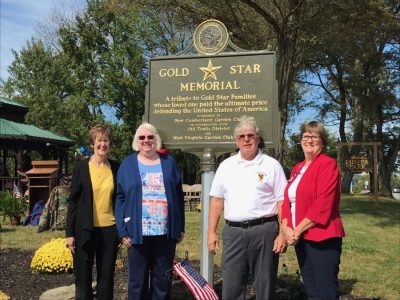 NEW CUMBERLAND — Early in October, the New Cumberland Garden Club did something that has never been done in West Virginia before.

Under the leadership of their President, George Hines, they installed and dedicated the first ever Gold Star Family Memorial Marker.

In the George Hines Park, along W.Va. 2 in New Cumberland, now stands the Blue Star Memorial Marker, installed last June and next to it is the new Memorial Marker.

Gold Star Family Memorial Markers are placed to honor families that have lost a loved one in service to our country.

Their mission is to offer honor, hope and healing through remembering fallen heroes by coming together.

Although National Garden Club Members have placed these all across the United States, West Virginia Garden Club and the Old Trails District are proud to finally have one in West Virginia. (Only Garden Club members can place a Blue Star Marker or Gold Star Family Marker).