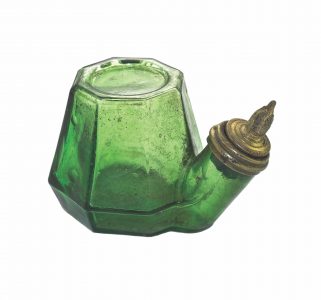 Photo Provided This green glass inkwell was made about 1880 in France. It is about 2 inches tall and has an unusual brass cap. It sold for $2,691 at an online-only auction by Glass Works Auctions of Pennsylvania.

Many people would never guess what this strange bottle was used for. Although it is called a “teakettle” by bottle collectors because of its shape, it is an antique ink bottle. A quill pen made from a sharpened feather was used to write before a better pen was invented in the early 1800s. After the ink bottle’s cap was removed, the pen point was dipped into the ink. Improved pens had a nib, a metal point with a small slit and a ball tip, and later, a reservoir with a feeding mechanism for the ink. When the pen was held in position to write, the ink flowed to the paper. The first ballpoint pen was invented in 1888, but because the ink was wrong, it didn’t become a financial success until the 1950s, after many improvements were made. The ballpoint pen is cheaper, so fountain pens have become status symbols used to sign important documents and proclamations. But collectors buy old and new fountain pens, and many also collect inkwells, ink bottles and related antiques.

Q: I’m moving soon and want to sell my Noritake Wheatcroft tea set before I move. I’m having trouble figuring out the value of the teapot (it’s the round, side handle style with lid) and where to find a buyer. What would be a fair price to ask for the teapot?

A: Noritake porcelain was made by Nippon Toki Kaisha in Japan after 1904. The company made sets of dinnerware with many different pattern names. Wheatcroft was made from 1957 to 1965. Two different teapots were made in that pattern, one a round teapot with side handle like yours and the other teakettle-shaped with a bamboo-wrapped bail handle. We haven’t seen the side handle teapot sold but it could be about $30 to $50, the price of teapots of the same shape but a different pattern. The bail handle teapot sells for about $48. Your teapot might sell for about the same price.

Q: I just found my grandmother’s sewing box along with a gold thimble, a strawberry-shaped pincushion, some unusual buttons, wooden spools of thread and a strange pair of tiny scissors. She also has many paper folders with ads on the front and needles inside. Are there collectors for old sewing items?

A: Yes. If the thimble is 14-karat gold, not just gold-colored metal, it is worth more just because it is gold. The other items are wanted by collectors who sew to actually use or by advertising collectors who like the small ads or use them to display items with old quilts or clothing. Before the sewing machine was invented in 1845, all clothing and linens were handmade using tools like yours. The needle trade cards were popular giveaways in the 1870s and ’80s. A few years later, the needle cases were improved and became small folded envelopes with a piece of fabric pierced by a set of needles. The needles in all these advertising pieces are of top quality and often are taken out of the books to use. Sewing utensils are not expensive and are collected by many. Look for them at house sales, where they may be out of sight in sewing and knitting baskets.

Q: Is a Chatty Cathy doll with the tag on it and in the original box worth much more than what I paid for it?

A: Chatty Cathy was a “talking doll” created by Mattel in 1959 and sold beginning in June 1960. The suggested price was $18, but catalogs sold them for less than $10. The doll “talked” when a ring on the doll’s upper back was pulled to activate a low-fidelity phonograph record inside the doll. Chatty Cathy dolls sell for more today than they did when they were new. Price depends on the condition of the doll, original clothes and whether she can still talk. Original box and tag add value. Early recordings were not very good, and many dolls found today can no longer “talk.” A doll in good condition that no longer talks sells for less than $50. Those that talk sell for $200.

Q: I inherited a metal bowl that was bought in the Philippines about 60 years ago. It’s about 1 3/4 inches high, 6 inches wide, and the top opening is 5 inches. Large stylized flowers in shades of blue and gold are on the outside with smaller ones on the inside. There are metal outlines around the flowers, and it has a gold rim. The surface is smooth. It’s marked “China” in red capital letters. How can I tell if it’s genuine cloisonne? What might it be worth?

A: Cloisonne is glass enamel on metal. The word comes from the French word “cloison,” which means “partition.” Designs are formed by small strips of wire soldered to the metal base, which is usually brass. Enamel is floated between the strips and the finished surface is smoothed. Cloisonne was developed in the 10th century. Most was made in China or Japan. Pieces marked with the printed word “China” were made after 1900. Design, age, size, quality and condition determine the price. Some cloisonne sells for a few hundred dollars. Some exceptional older pieces sell at auction for over a thousand dollars. It takes an expert to tell the difference between old and new cloisonne and to evaluate the piece.

TIP: Keep Barbie barefoot. Don’t store a Barbie doll with shoes on because the shoes may damage the feet. Store the shoes where they won’t be lost.

Current prices are recorded from antiques shows, flea markets, sales and auctions throughout the United States. Prices vary in different locations because of local economic conditions.